Kennedy Barron is an amazingly talented student-athlete, but that’s just one dimension of her interests and skills. The Class of 2021 talent loves everything from poetry to writing essays to going to musical theater and has won awards and been published for her literary skills.

Check back in the next few days when we’ll run some examples of Kennedy’s award-winning publications!

And, oh yea, she’s a top softball player too has the skills to play multiple positions at an ACC level school in Duke and the academics to excel there too.

Here’s more on this player who has a great shot at repeating in the 2021 Extra Elite 100! 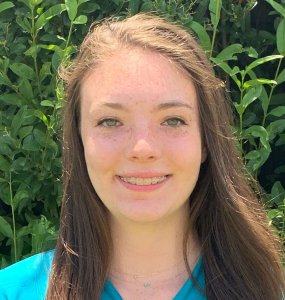 The 5-foot-10 right-handed pitcher/utility player helps lead the Birmingham Thunderbolts 03 team, ranked #8 in the country by the Extra Inning Softball, both at the plate and on the mound.

A consistent power hitter in the Bolt’s lineup of big bats, Kennedy was selected to the 2019 PGF Platinum All-Tournament Team as she went 5-1 with a 1.17 ERA in 42 innings and batted .325 with six RBIs during tournament play.

Kennedy is four-year high school varsity starter for perennially top-ranked Class 3A Pisgah High School which won its 10th overall state softball championship in May 2019, a state record-setting mark for all Alabama softball programs regardless of classification.

Daughter of Birmingham Thunderbolts 03 coach Lowell Barron, Kennedy made her softball debut as a 7th grade varsity starter for Pisgah High which finished runner-up in the state title game. The following season, as an 8th grader, she led her team to a state championship title and was tabbed All-Tournament Team and Most Outstanding Player.

Most recently, in May of 2019, as her sophomore season came to a close, Kennedy earned another softball state championship title and was again selected All-Tournament team.

She has been named by the Alabama Sports Writers Association (ASWA) as an All-State and All-Region selection for Pisgah High for four consecutive years. During her high school campaign, she has collected 209 RBIs, 401 strikeouts, and 30 home runs.

The multi-sport athlete also has been a varsity basketball player for three years for Pisgah, winning back-to-back state basketball titles in 2018 and 2019.

In addition to softball and basketball, Kennedy also recently qualified for the state meet for indoor track in the shotput event. The 4.0 student-athlete is a member of the Beta Club, Spanish Club, History Club, FCA, Scholars Bowl team captain, Math team and Robotics team, and is a University of Georgia Plant Science Scholar.

You have an amazing athletic background in softball, basketball, track even boxing and weightlifting!  Which sport came easiest to you and which has been the hardest? And why?

I would definitely say that throwing shotput came easiest to me; the technique is actually not entirely dissimilar to throwing a softball, well, an 8.8 pound softball. It isn’t quite the same, but the two throwing methods share remarkable similarities that one might not initially expect.

I always found basketball to be the most difficult sport I’ve played. In the other sports I participate in, there seems to be more structure, which I appreciate. To me, basketball is a much more fluid, chaotic sport. With such a high-speed tempo and a dizzying numbers of plays to remember, it can sometimes become easy to get lost in the chaos and the rapid pace of the game. Oftentimes I find myself looking to my basketball coach, Carey Ellison, a tremendous coach and mentor, for concrete and specific instructions, but more often than not, I hear the typical refrain “Just play basketball.”

Basketball pushes me to think and react quickly, to stay in great physical condition, and to continually be thinking of ways try to stay one step ahead of the game. While sometimes a difficult task for me, basketball betters me as an athlete and an individual, which betters our team, which is the ultimate goal.

*** Scroll down to learn more about Kennedy including her thoughts on boxing, basketball and balancing athletic with creative and artistic interests. Plus, the one thing she admits—with her sisters’ agreement—that she CAN’T do well!!!

January 3, 2020
Read More
Read more of The Inside Pitch

2001 Extra Elite 100 Candidate: Super Utility Player Annabelle Widra "Can Do It All" On the Field!