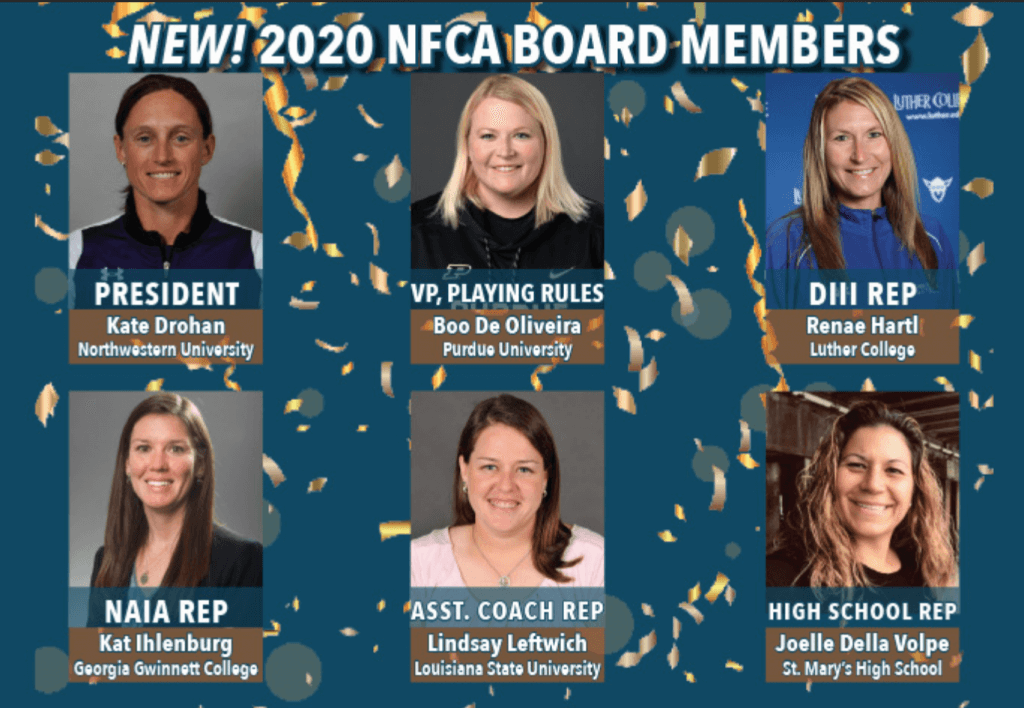 Kate Drohan, head coach at Northwestern, was elected the new NFCA President and is one of six members who were voted to the NFCA’s Board of Directors for 2020, the Association announced on Thursday.

The six coaches will officially begin their three-year tenures January 1, 2020.

Additionally, the NFCA announced its new committee members for 2020, who are listed below. Please note the complete High School All-America Committee will be determined at a later date.

For Ihlenburg, Leftwich and Della Volpe, it is their first board appointment, while Drohan (2nd Vice President), De Oliveira (Vice President for Membership) are returning to the Executive Board and Hartl, who served two years as the DIII rep, continues her service with a full three-year appointment.

Leftwich takes over the role held by Texas Tech’s Sam Marder, who was promoted to associate head coach during last year’s voting process. She will serve out the final two years of the term and be eligible to run for the position again.

Additionally, Tennessee co-head coach Karen Weekly will move into the Past President role following her three-year stint as the Association’s President.

Here are bios on the new NFCA Board Members...

Entering her 19th season at Northwestern's helm, head coach Kate Drohan has built the Wildcats into a perennial power, winning a pair of Big Ten Championships and making back-to-back Women's College World Series semifinal appearances, which included a national runner-up finish in 2006. In 2019, she steered Northwestern to a 47-13 mark and back to the NCAA Super Regionals for the first time since 2008.

After 18 seasons, Drohan has amassed a career record of 617-358-1, earning her 600th career victory on April 9 against Notre Dame. Her record includes an incredible five-year stretch from 2005-09 in which NU compiled a combined record of 215-77, reached the Super Regional round of the NCAA Tournament four times, finished 2006 ranked No. 2 nationally and became the first private school in NCAA history to advance to the WCWS semifinals in consecutive years (2006-07).

Boo De Oliveira enters her fourth season at the helm of Purdue Softball, returning to the program where she was an assistant coach from 2007-10. She guided the 2019 Boilermaker squad to 34 wins, a Big Ten Tournament quarterfinal appearance and a berth into the National Invitational Softball Championship.

In addition to Purdue, De Oliveira served as an assistant coach and recruiting coordinator at Arkansas, Arizona State and North Carolina. De Oliveira began her coaching career at Division III Edgewood College in 2006, followed by the head coaching role at Madison Area Technical College at the NJCAA level in 2007. At Edgewood, she was part of the LMC Coaching Staff of the Year that helped the program to 30 wins and the first undefeated season (16-0) in conference history. De Oliveira revived a dormant program at Madison and led the WolfPack to a top-10 national ranking with the help of two NJCAA All-Americans.

Renae Hartl is entering her 19th season as the Norse’s head coach and has also served as Luther’s athletic director since July 2015. In 18 seasons, Hartl has posted a career record of 587-192 (.754). She has guided the Norse to 11 NCAA Division III Tournament appearances in the last 13 years, including five National Championship Finals since 2010, recording a third-place showing in 2018, fifth-place finishes in 2010, 2012 and 2013 and seventh in 2011.

The only head coach of the Georgia Gwinnett College softball program, Kat Ihlenburg has developed the Grizzlies into a championship squad built upon toughness, character and a devotion to its community. The five-time Association of Independent (A.I.I.) Institutions Coach of the Year led Georgia Gwinnett to consecutive NAIA World Series in 2018 and 2019, the first two appearances in program history.

She has steered the Grizzlies to four A.I.I. conference championships, five NAIA tournament bids, and recognition as the NAIA Champions of Character team award winner. Ihlenburg has totaled a 286-102-2 (.736) record and recorded back-to-back 50-win seasons in 2017 and 2018. The 2019 squad featured a national semifinal appearance with a win over No. 2 Marian (Ind.), 45 victories and a sweep of the NAIA Opening Round Bracket.

Joelle Della Volpe, who currently serves as the East Region chair on the NFCA’s High School All-America Committee, has been the head coach at St. Mary’s High School in Rutherford, N.J., the past four seasons. She came to St. Mary’s from Hackensack High School, where she steered the Comets’ program from 2006 to 2015, earning Coach of the Year honors in 2012. Prior to taking over the reigns at Hackensack, she spent 2005 and 2006 on the Dominican College staff as an assistant coach.

Della Volpe entered the coaching ranks in 2002 as the head junior varsity coach at Belleville High School (2002-05) and also served on the Rutgers-Newark staff, her first collegiate posting, from 2003 to 2004. In addition to her coaching duties, she serves as the CEO of sources4coaches, a free mentoring program offered to rookie coaches.

Lindsay Leftwich embarks on her eighth season as an assistant coach at LSU. She is involved with all aspects of the program which include defense, hitting, recruiting, video scouting and camps. The former Northwestern State standout has been with Beth Torina for every step of her 11-year head coaching career which includes LSU's run to the 2012, 2015, 2016 and 2017 Women's College World Series.

Before coming to LSU, Leftwich spent four seasons as Torina's top assistant at Florida International. The Golden Panthers collected 14 All-Sun Belt selections highlighted by a sweep of the league's 2010 postseason awards where Kasey Barrett picked up the SBC's Pitcher of the Year, Ashley McClain notched SBC Player of the Year and Brie Rojas secured SBC Freshman of the Year. McClain also came away with NFCA All-South Region First-Team honors in 2010 and 2011.