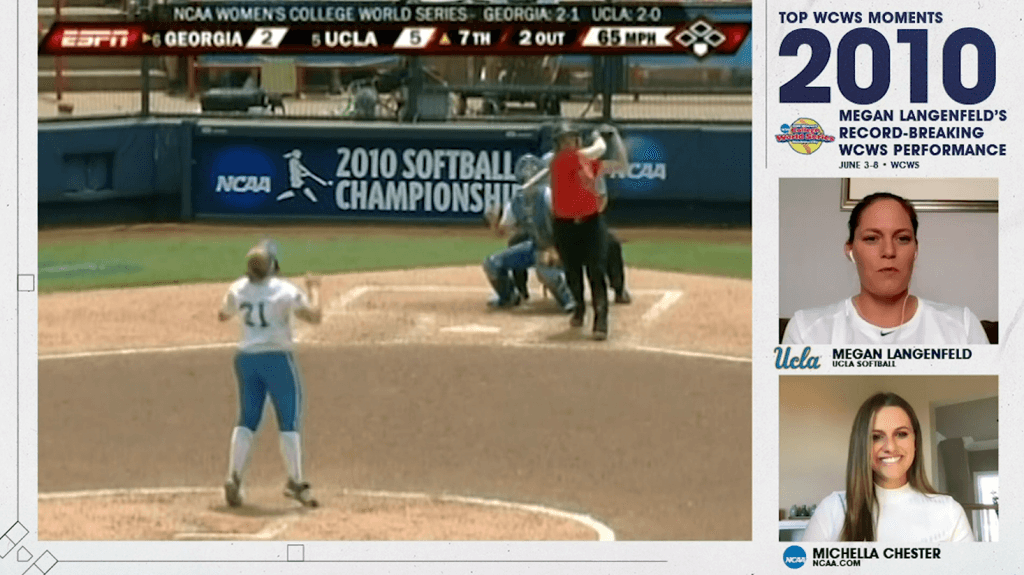 The NCAA.com is doing a great job looking back at previous Women’s College World Series and some of the heroes that impacted the pinnacle of college softball.

It’s been exactly a decade since Megan Langenfeld and her UCLA teammates captured what was then the Bruins’ 11th National Championship and Megan had a series for the ages.

As you’ll see in this excellent video interview below done by Michella Chester for NCAA.com’s DI Softball Page, Megan recaps her championships performance when she hit .706 with four home runs and won three games—an amazing two-way performance (she was Rachelle Garcia before Rachel hit the UCLA campus!).

But that wasn’t the first time I had seen her capture a championship: when I first got into softball in 2006, one of the first events I covered was the ASA Nationals and remember travelling to Oklahoma City (I definitely recall it being 110 degrees… ugh).

Megan played on his Worth Firecrackers teams from 2004 to 2006 and she would win an ASA National Championship and did it the very same way—unhittable pitching and a bat that could win it with any swing.

Last summer I did a piece on the Firecrackers and several of their great alumni as remembered by Tony Rico, the head of the organization.

One of the questions asked was: “What pitcher would you want in the circle to win one game?”

Coach Rico’s answer: “Megan Langenfeld.” He said: “She had reliability and accuracy, reliability being in her mental and thinking processes and how she handled pressure. Megan was very capable of thinking clearly under stress.”

Thinking AND executing at unbelievable levels!

Today, Megan is an assistant coach at Oregon where she’s coached since August of 2018. She’s continued her success as a college coach similar to what she cultivated in her playing days and remains one of the greatest softball players I’ve ever seen. And nicest too!

Megan Langenfeld had a legendary 2010 WCWS performance — She broke down the record-breaking week with NCAA.com’s Michella Chester

Megan Langenfeld and 2010. Her senior season as a UCLA Bruin — and the most memorable one of them all.

Everything was in slow motion, she said. The softball was practically floating to her in the batter's box.

Langenfeld was already one of the best players in college softball going into that Women's College World Series. But in this particular week in Oklahoma City, she was unstoppable. Langenfeld hit .706 with four home runs and earned three victories in the circle. She racked up 12 hits that week and tied a WCWS record with two home runs in a game, but was the first to do it in the championship series. She also set a WCWS record with 10 total bases (two home runs, two singles).

She was on a different level in Game 1 of the championship series. Not only did she hit a home run early in the game and total 10 total bases, but when she walked up to her last at-bat she did something special.

UCLA gave up a 4-2 lead in the top of the seventh inning, and Arizona looked like it might win it in the bottom of the 7th. But what should've been the final out of the game on a fly ball from Dani Yudin resulted in a miscommunication in the Wildcats outfield, and the Bruins had another shot. Arizona then intentionally walked Julie Burney to bring up Kaila Shull. She doubled to knock in pinch runner Marti Reed with a double to tie the game and force extra innings. The game was 5-5 in the bottom of the eighth inning when Langenfeld came up. She was already 3-for-4 with a home run, two singles and a strikeout on a pitch up in the zone.

The Wildcats decided to pitch to Langenfeld, despite the damage she had already done. Arizona pitcher Kenzie Fowler was successful against Langenfeld in the previous at-bat, when she struck out swinging.

Langenfeld wouldn't be fooled again. She knew Fowler might go back to that very same pitch, and this time she would be ready. She got under it and drove it out of the park to take a 1-0 lead in the best-of-three championship series.

The rest is history. A blister prevented Langenfeld from pitching in Game 2, but it didn't prevent much else. When Langenfeld stepped into the box, most everyone was surprised when they pitched to her. And in similar Langenfeld, Oklahoma City style — she hit another one out of the park. The Bruins captured their 11th NCAA softball title with a 15-9 win over Arizona, and Langenfeld ended her legendary UCLA career on top and as the WCWS Most Outstanding Player.

Michella Chester's work has appeared on Georgiadogs.com, FOX Sports South, Atlanta Blaze MLL and SB Nation. She is a graduate of the University of Georgia where she played lacrosse and earned a degree in Journalism and Sport Media Certificate. Follow her on Twitter @michellachester.