Yesterday, we announced the dates for the updated 2021 Extra Elite 100 to begin in January and we have received an impressive wave of candidate information including our spotlight player below.

If you want to see how to send in a profile for consideration, you can check out Kali Heivilin’s info below.  Of course, few are going to have the jaw-dropping stats and accomplishments of this recent Alabama commit, but don’t let that intimidate you!

Kali first came to our attention earlier this year when she had a monster sophomore season for her Three Rivers (Michigan) High team.

The 2021 grad, who can play shortstop and catcher, was selected as the Extra Inning Softball National High School Player of the Week for April 22, 2019 -- you can read the text of her big week below --

She ended up being a 1st Team Extra Inning Softball High School All-American as she broke her own school's high school record of 18 home runs set as a freshman by slugging 19 her sophomore season (2019) while batting .596 with 68 hits, 65 RBIs and 88 runs scored, a Michigan high school state record.

This summer she played for John Lamar’s Indiana Magic Gold team and continued to impress. Said Coach Lamar of his talented junior: “Kali is a mix of power and speed blended together. She is super athletic.”

The weekend of September 27-29, Kali took her official visit to Alabama – the same weekend as Aubrey Barnhart (check out how that weekend went in this PROFILE) and Jenna Lord, and committed to the Crimson Tide not long after.

I am very excited to announce that I have verbally committed to the University of Alabama to continue my academic and softball career. I am very appreciative of all the love and support from all my coaches and my family that has helped me chase my dreams. #RollTide❤️❤️@AlabamaSB pic.twitter.com/W6IubN8vmf

Here's more on Kali including her heavy recruiting interest, her other sports and more... 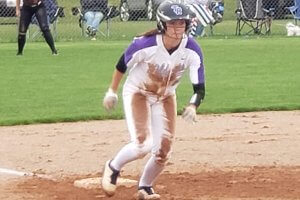 It’s not like Kali Heivilin hasn’t had success before.

The sophomore from Three Rivers (Michigan) High is a four-sport athlete who was 1st team All-State last year when she broke her school home run and RBI records with 18 and 72, respectively.

Kali has also been a two-time All-Conference honoree in basketball and a two-time regional champ in powerlifting as she got 5th in state at the 145-pound weight class. Also a volleyball player, the Michigan standout was a starter in all three team sports as a freshman.

If that isn’t enough, she has a 3.89 GPA and for her on-field softball talents has had interest from ACC, Big Ten and SEC schools among others.

This past week, however, she was especially impressive as she played in five games, homered in each one, and went 11-for-14 (.785 average) with six homers, three doubles and five walks to earn our Extra Inning Softball National Player of the Week.

What's been the key to her success? Being prepared to jump on mistakes, she says.

"I don't see a lot of good pitches," Kalie told Extra Inning Softball today, "so I have to be ready for when they mess up. I have to take advantage of the opportunity and hit it as hard as I can. I have been very lucky to make good contact."

The shortstop, who was ranked in the top 150 of the Extra Elite ratings and plays for the Indiana Magic Gold-Lamar team, also made a pair of outstanding diving backhand from deep in the 6-hole to throw out runners and, overall, had a 1.000 fielding percentage.

She says a key to her increasing success this week has been working hard individually and with her teams.

"I workout a lot," she explains. "I usually hit my Crossfit box three days a week at 6am before school and more as I have time. It helps me strengthen my game and elevate my play. I work super hard at practice and off the field on my own time, hitting and working on my fundamentals. Since I have joined Indiana Magic, they have really helped improve my game as well. I couldn't be more thankful of the help and support they have given me."

For the season, Kali is hitting .675 in 13 games with 10 home runs, 28 RBI, seven steals, nine walks versus zero strikeouts and she has an impressive .720 on-base percentage.

Another reason, she believes, her power numbers have gone up is the attention she's given to weightlifting both as a sport and for her softball skills.

Cleaning Up! 100+ New Updates in the Signing/Verbal Database As Commits Continue Everywhere (Jan. 23, 2020)!