Softball players with Samoan ancestry have had a large impact on the game for years now and Mina Tala is no different.

Mina values respect, loyalty and humility—common traits of her Samoan culture—and of course, Samoan hitters are known for their strength which Mina has in spades.

The talented 8th grader plays the corners and pitches for the OC Batbusters team coached by Toni Mascarenas, which is one of the better travel ball teams in the country featuring Class of 2024 players.

Mina has all the power you would expect from a Samoan ball player, but she also has one of the best gloves in Southern California with soft hands and a quick transition.

In addition to being an outstanding fielder, Mina is also one of the better pitchers on the Southern California travel ball circuit, throwing with great spin and terrific placement from the circle.

In a stacked pitching rotation last season, Mina was often used by Coach Mascarenas in crunch time.  Offensively, the talented player is always a threat at the plate, possessing power to punish the ball while hitting for average and seldom striking out.

Here’s a closer look at this strong candidate for the 2024 Extra Elite 100 which launches later today! 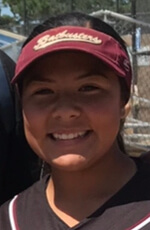 Girls of Samoan descent have had such a big impact on the sport of softball.   How do you feel about your Samoan heritage as it relates to the sport?
For a long time, Samoan males have found success with football and it is good to see the recent success of many Samoan girls in softball. I always feel like I have another team outside of my Batbusters team and that is all the other Polynesian girls that play softball in So Cal. We all know each other, our families know each other, we cheer for one another (even when we play against each other), and always feed each other! It is a tight knit community that I am super proud to be a part of.

Scroll down to read more on Mina Tala!

January 1, 2020
Read More
Read more of The Inside Pitch