Extra Star Power: 2020 Texas Hurler Megan Lee… “She Can Beat You With Every Pitch”

Megan Lee is known for her "competitive nature" in Texas softball circles and the rest of the country found out about that competitiveness at the PGF 18U Premier Nationals this past summer.

Lee, an amateur hair-styling enthusiast, had four wins, a save and a 1.60 ERA in 28 innings to help Impact Gold-Jackson finish tied for 7th place at PGF.

"Megan Lee, is a very crafty pitcher committed to the University of Houston," Impact Gold-Jackson coach KC Jackson said. "She has a powerful mound presence with an even more powerful competitive nature. The kid just absolutely hates to lose!  That's a beautiful thing. The pitcher has to be the most competitive player on the field ... and Megan is that pitcher.”

“She can beat you with every pitch and often does. Megan is a hard-throwing kid that's a riseballer, a power pitcher, a junkballer all rolled into one. She has the work ethic that second to none. Either she's at school, at pitching lessons or in the gym...what more can I ask from a player?  She's a very special kid." 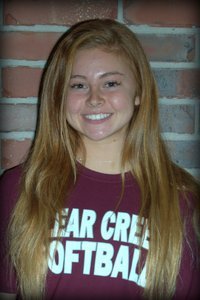 Keep scrolling down to read more about Megan!