Remember about two weeks ago when there was serious discussions that the Contact Period for 2022 grad year recruits could be pushed back from Sept. 1 to perhaps January 1 or even into the summer?

We published an open letter from Greg Borzilleri, the head coach of Athletics - Mercado/Greg, who felt this would be a serious mistake and detailed his conversation he had with NFCA leaders (see below for the original story).

Today, the NFCA sent out the results of a vote by coaches on their recommendation for the Contact Date and since it didn't reach a "super majority" of 65% in favor of changing the model (it was at 60% in favor of making a change), the NFCA stated it will "not recommend a change to the Sept. 1 contact date."

You can read the full text of the email here: 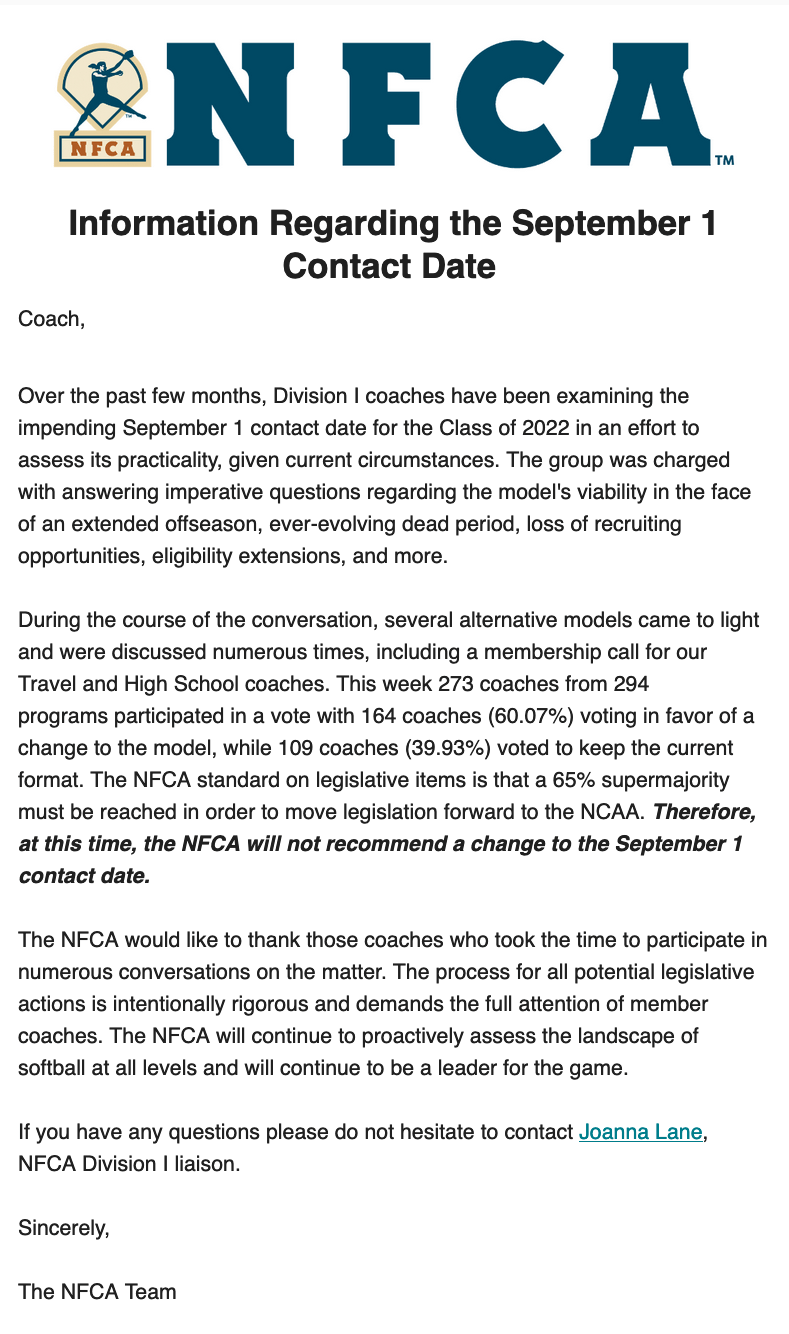 Here is the previously published open letter from Coach Borzilleri...

The COVID-19 pandemic has caused great upheaval in every area of life and in softball specifically has led to everything from cancellations of the spring college and high school seasons to impacting college coaches’ abilities to recruit.

One of the biggest fears right now is the contact period being pushed back to as far as next summer (July 1) when it was supposed to start Sept. 1 for the Class of 2022. That would only leave a few months of interaction between college coach and prospect.

About two weeks ago, the NFCA posted the following explaining why it might be advantageous to move the contact and recruiting periods back: 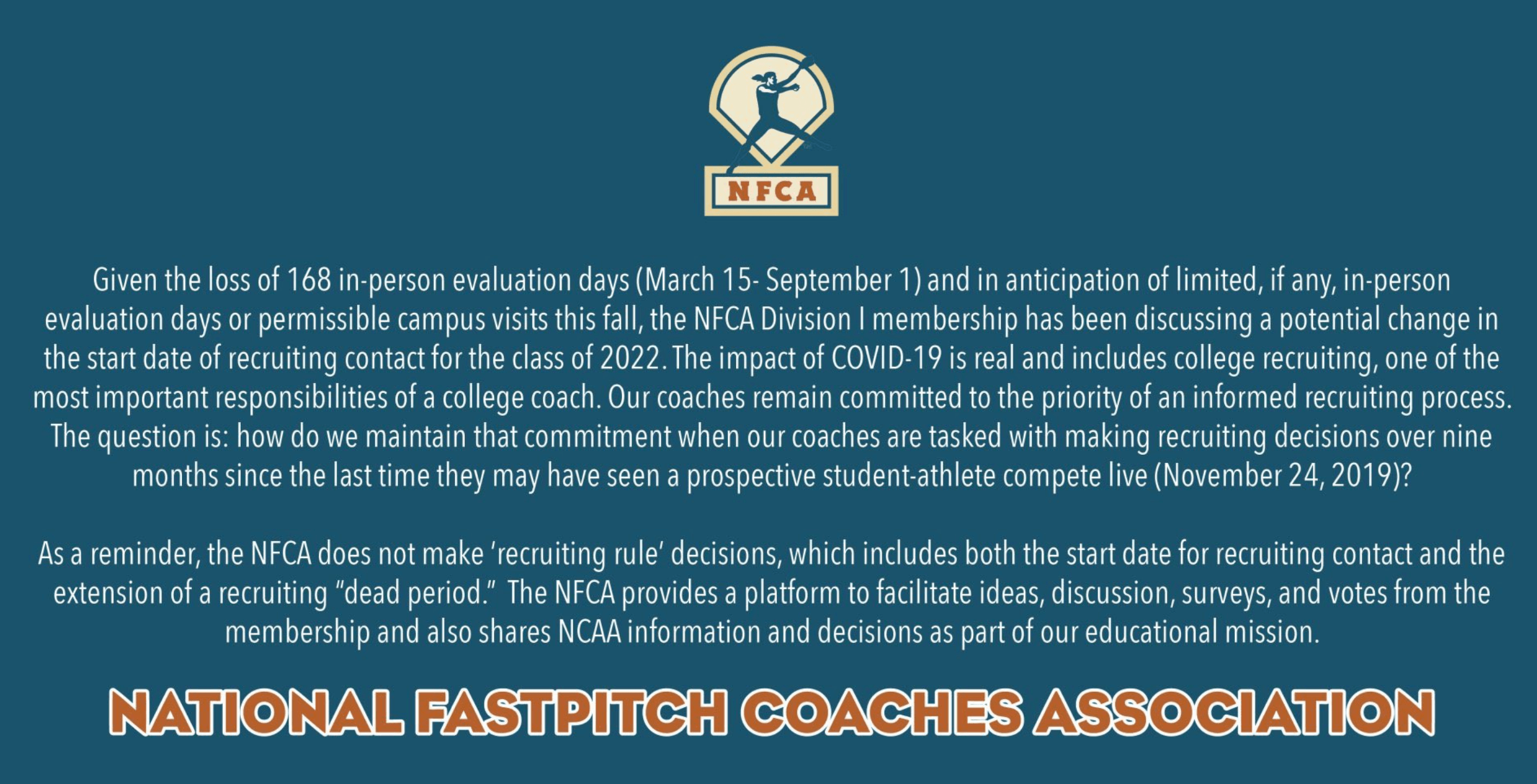 Initially, this drastic change was thought to be a one-time Coronavirus option for altering the calendar should the NCAA extend the dead period through the fall. Division I coaches would likely not be able to recruit in person prior to next year's Women’s College World Series completion, leaving a very limited in person evaluation period prior to start of contact on July 1.

Coaches on both sides—college and club—fear there’s a strong potential for rushed decisions once contact is opened, with limited time to visit and build relationships prior to the signing period in the fall of 2021.

Some coaches, like North Carolina State Head Coach Jennifer Patrick Swift, tweeted that: “If September 1st stays, PSAs potentially are going to be committing to schools they haven’t yet visited and coaches they barely know because we know the dead period is getting extended. Not good for either side in ensuring it’s the right fit.”

One top club coach, Greg Borzilleri who manages the Athletics – Mercado/Greg 16U team, took the lead on pushing back against the potential shrinking window for player evaluations, especially for the 2022 grads.

The coach drafted an Open Letter expressing his concerns and sent around to a large number of other club coaches to read for input, including well-known figures such as Scott Smith (Texas Bombers), T.J. Goelz (Tampa Mustangs), Sean Brashear (Firecrackers), Greg Dickel (Iowa Premier), Ed Naudin (Texas Glory) and several others. All agreed with his viewpoints.

Borzilleri then directly emailed it to Carol Bruggeman, the head of the NFCA, and , importantly, he feels “put my name on it so it wasn’t just an anonymous complaint letter.”

Here’s the entirety of his letter:

Not only did Bruggeman respond, she and Kate Drohan, the President of the NFCA Board of Directors and a Co-Head Coach at Northwestern, set up a phone call with Borzilleri to solicit ideas and feedback.

The parties spoke last Wednesday and the club coach felt it was a positive conversation regarding potential legislation.

“They were 100 percent engaged, listened and appreciated our feedback and concerns,” Borzilleri tweeted after the meeting. “There are other options that the D1 council is considering not just the 7/1 model that is being widely reported. Although that is still on the table.”

“At the end of the day our PSA’s (Prospective Student-Athletes) and SA’s (Student-Athletes) are at the heart of this issue and we want to be sure we are looking after their interests as TB Coaches. I am confident our voice has been heard and thankful to the @NFCAorg for having this important open discussion.”

Where the recruiting calendar ends up is anyone’s guess with so much dependent on how the Coronavirus pandemic surges or is reduced. We don’t know if we’ll have college football in the fall, let alone know what the future holds for college recruiting windows.

But if there was one take-away from this complicated softball situation, it was the positive results of one voice taking action in a constructive way and a dialog created where a potentially opposing viewpoint was heard and validated.

If only our world and national leaders could interact in such a respectful way.

Still, the solution isn’t resolved and Borzilleri intends to monitor the situation as he feels there is much more at stake here than just games on the field. Ultimately, he knows that the decision will come down to what the DI coaches think and want.

“My hopes are that, if they don’t leave Sept. 1 as is, that they go with a hybrid model that will still allow for conversations and relationship building,” Borzilleri told Extra Inning Softball.

“There are so many things going wrong for these young ladies that I just don’t want to see anything else taken from them. I truly feel this is as much a mental health issue as anything.”

Extra Star Power: 2024 Tulsa Elite P/OF Dasia Mason… How This “Country Girl” Can Do It All!