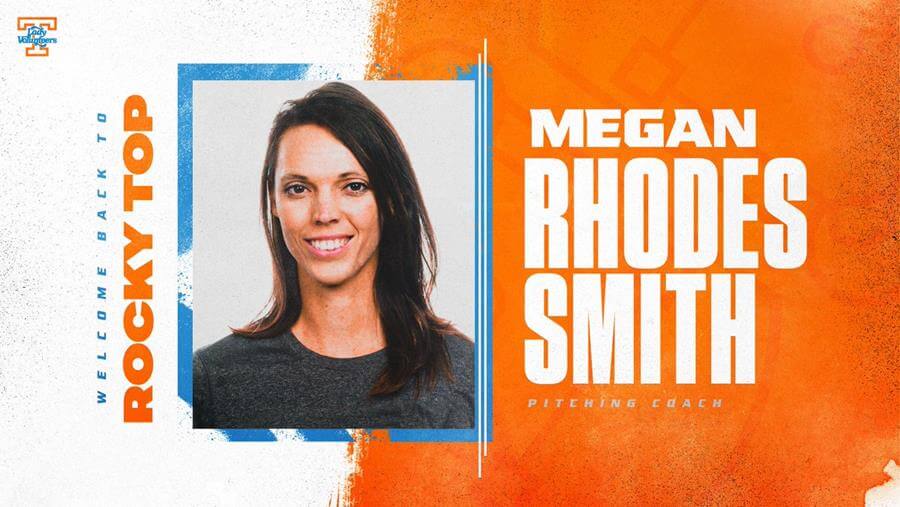 When we published the story of long-time Tennessee Vols pitching coach Marty McDaniel resigning on May 18, 2020, we got the sense that the SEC school would look to go for a young, vibrant, up-and-coming coach to fill the position.

One name we heard from several sources as a front-runner was former UT star pitcher Megan Rhodes Smith and today it was announced that she would indeed be headed to Knoxville to be the next pitching coach.

Smith, a standout pitcher for the Lady Vols from 2005-08, spent the last year as the head coach at Belmont in her hometown of Nashville.

"Ralph and I are thrilled that Megan Rhodes Smith is returning to Rocky Top to join our coaching staff," said Karen Weekly. "I have watched Megan flourish in her coaching career since she graduated from Tennessee and I believe that she is a rising star in our profession.

"She is a passionate and innovative teacher.  She knows what it's like to step into the circle and face the toughest SEC and post-season competition.  Megan held herself to the highest standards as a UT student-athlete, both on and off the field, and will expect the same of our pitching staff.  Her character is outstanding and the women of Lady Vol Softball will benefit greatly from her mentorship."

Prior to her time with the Bruins, Smith spent six seasons focusing on the development of pitchers and catchers at Lipscomb University, and served as the program's associate head coach from 2018-19.

During her tenure at LU, Smith had an immediate and long-lasting impact assisting in the program's recent successes. Most recently, the Lady Bisons made appearances in the 2019 and 2014 NCAA Regional tournaments after clinching Atlantic Sun tournament titles.

The team saw individuals garner accolades as well, with four pitchers under her guidance earning Atlantic Sun All-Conference honors, thanks to finishing in the conference's top five in strikeouts, earned run average (ERA) and wins. In 2018, the Lady Bisons pitching staff finished the season ranked 23rd nationally in ERA. Additionally, the corps led the Atlantic Sun in strikeouts in 2016 and 2017.

Before joining the Lipscomb staff, she spent one season at Western Kentucky. During her stint with the Hilltoppers, the program boasted a 43-18 overall record and earned its first at large bid into the NCAA Tournament.

Smith also has previously served as an assistant coach at both Middle Tennessee State and Charleston Southern, helping the latter to its first 30-win season in program history.

A well-known name on Rocky Top, Smith returns to her alma mater ranking third in program history with a 1.77 career ERA, fourth with 726 career strikeouts and tied for fifth with 67 wins. She holds a spot in UT's top 10 in nearly every pitching category.

"I am honored to have the opportunity to return to the University of Tennessee and give back to this incredible program," Smith said. "From the challenges, the successes, the lessons learned, and the amazing people who became part of my life, my time at Tennessee has continued to shape me far past my graduation date.

"I believe in this program and in the women who are part of it. I'd like to thank the Belmont softball team, community, and administration headed by Scott Corley and Renee Schultz for their belief and support. I want to thank Coach Fulmer, Tara Brooks, and Ralph and Karen Weekly for the chance to give my all for Tennessee again. I'm looking forward to working with the next generation of Volunteers."

Smith was part of one of the program's most successful stretches as the Lady Vols reached the Women's College World Series three consecutive years (2005-07) and recorded three 60-plus win seasons in that time and another 50-plus win season in 2008.

Equally competitive in the classroom, Smith earned SEC Honor Roll distinction for three years, culminating with a 3.80 grade point average. She went on to earn a master's degree in sports studies with a concentration in sports psychology from UT in 2009.

Smith will inherit a diverse pitching staff that includes sophomore Callie Turner (2.67 ERA, 8-7 W/L record), who stepped into the ace role during the abbreviated 2020 season, after Ashley Rogers, who returns as a redshirt sophomore, was temporarily sidelined with an injury. The Lady Vols pitching corps also will include senior Samantha Bender (2.83 ERA, 5-1 W/L) who transferred to UT in 2020 from Iona College and appeared in 13 games. Sophomore utility players Kiki Milloy and Anna Hazelwood also saw time in the circle, while incoming freshman Bailey McCachren, who ranks 14th among pitchers on Extra Innings Softball 2020 Extra Elite 100 List, will round out the squad.

What others are saying...

"Congratulations to Megan Rhodes Smith. I'm happy Tennessee is keeping it in the family and hiring someone who cares deeply for the program like only an alumnus can.  Megan will have an immediate impact on the pitching staff. Since her playing days, Megan has evolved and grown in her knowledge of pitching, athlete development and coaching the game at an elite level. She is exactly what Tennessee needs right now." - Monica Abbott, Tennessee 2004-07

"Megan is one of the bright young minds in our coaching profession.  I have always admired her keen sense of awareness and desire to continue to learn the best practices in our sport and lead her athletes to success." - Rachel Lawson, Kentucky softball head coach

"Megan Rhodes-Smith is one of the brightest stars in our profession. She was a key contributor to the success of our pitching staff in our championship season at WKU and went on to help establish a consistent winning tradition at Lipscomb. Megan's ability to connect with each player on a personal level and establish a bond of trust is one of her many assets. She truly cares for her student-athletes and makes it her mission to help them become their best self. " - Tyra Perry, Illinois softball head coach

"As a former Volunteer, Megan Rhodes Smith is uniquely qualified to be the pitching coach at the University of Tennessee. She understands what it takes to be successful at that level and is committed to the development of her student-athletes both on and off the field. She has a tremendous work ethic and will do a great job leading the next generation of Tennessee pitchers." - Jennifer Brundage, Michigan softball assistant coach

"What a sweet homecoming for Megan and the Volunteers! Megan is a fantastic pitching mind. She is creative, inquisitive and a life-long learner. She has successfully developed pitchers at every stop she has had in her professional career. She is extremely familiar with the SEC and is sure to bring passion and energy to the Tennessee program." - Beth Torina, LSU softball head coach

"Megan is a next level coach and person. She is an incredibly smart mind who makes everyone around her better, and she is a great teacher who genuinely enjoys helping others learn the game. Her ability to impact the mental game of her student-athletes really sets her apart and makes her a coach to rely on. Megan's standards are extremely high and she strives for & demands excellence on a daily basis from herself and those around her. She is a coach who truly cares about the whole person, and she will be an outstanding addition to the storied Lady Vol program. I'm excited for her to have the opportunity to impact her alma mater now as a coach." - Kristin Ryman, Lipscomb softball head coach