Extra Inning Exclusive: Maggie Bowles Legacy of Hope… Her Softball Career Was Short, but What an Impact She Made!

Shawn and Kelly Bowles weren’t sure what their precocious, energetic young daughter, Maggie, would do to keep busy—she tried dance and soccer before she found her true love: softball.

Before she could begin her 8U season in Trussville, Alabama, Maggie’s bright light was extinguished, but the impact she made on those around her was strong—and her legacy continues to grow.

Here, as told by her father, is Maggie’s story… also, be sure to check out the video at the end telling the story of Maggie and her family including the Maggie’s “Rules for Life” Tournament...

I remember waking the first time to the sound of the car’s notification system telling me emergency services had been contacted.  The second time I woke up, it felt like a dream…. something was wrong.  I’m in my car.  I’m in my car!

First Responders were with her in the backseat…

Maggie or Mags, as she liked to be called, loved being on the softball field.  She loved dirt piles, candy, base hits, laughing with friends, and getting more candy.  She was part of a family at the ballpark, and the nine other players on her team had become her softball sisters.

She was a six-year-old, scared by the normal stuff six-year-olds are scared of, yet put a softball mask on her, and she would toe the thirty-foot line, daring someone to hit it to her.  As we prepared for our 8U season, Mags told me her two goals:  Learn how to “hit it to the outfield” and pitch.

On July 7, 2017, Maggie and I were running an errand – a simple task of picking up a new school lunch box – when we were rear-ended by a distracted driver.  Unconscious at the scene, Maggie was transported to Children’s Hospital of Alabama.

There is no playbook for the sudden loss of a child.  As my wife, Kelly, and I struggled through unimaginable grief, our community mourned alongside us.  The support shown by those around us lit our way in the days and months following the accident, reminding us that our Maggie would never be forgotten.

We Play for Maggie

Softball sisters from Trussville Middle School and beyond began to wear a “Mint Majesty” ribbon in their hair, Maggie’s player number 7 written on their arm, and a “Remembering Maggie” wristband around their bat or dangling from their wrist, all to honor the memory of Maggie.

They made a simple and heartfelt pledge, “We play for Maggie.”

This pledge was carried forward and displayed in various special ways.  For example, Maggie’s friend Hudson placed an “M” on the back of his football helmet to honor Maggie the following fall.  Since her softball number was 7, M7 was born.

Kelly and I chose that tagline as a way to honor her through a team fundraiser; it was the first of many times M7 would be used to honor Mags.

The Hewitt Trussville Middle School Softball Team’s spring 2018 season proved to be a great one and many of the girls continued to wear a Mint Majesty bow to honor Mags during each game.  As the team progressed to the Metro Area Championship, they asked if they could add M7 to their helmets.

The night of the championship was surreal.  I stood on a hill behind home plate, watching.  I never sat.  I paced, fidgeted, and watched as the girls won game one, dropped game two, and played a winner-takes-all in game three.  There were moments I was unaware of my own surroundings, feeling as though I was watching Maggie play.

As the clock approached midnight, they won the final game and became Metro Champions.  I was so proud of the team and all they had worked for.  The players asked me to join them as they took a team photo with the M7 helmet.

It was in that moment that I felt the Bowles were adopted into their family.  They honored Maggie in a way that only another softball player would be able to do.

Back on the Field

The softball community has been supportive in Trussville and beyond.

In the fall of 2017, our softball park offered to let me sit in the press box to watch games.  The more Kelly and I discussed it, the more I thought Mags would want me on the field with her friends.  I asked a friend if I could join their team as an assistant coach, and soon I was back at the park coaching 6U softball.

I not only stepped on the field as a coach of The Grey Huskies, but with Maggie’s friends and former teammates.  I knew, without a doubt, she would be proud I was back on that field.  I wasn’t alone; the same Hewitt Trussville Middle School players that played in honor of Maggie, often arrived to support the team and coach a base if needed.

Coaching on the field, I could feel her with me; I could see her skipping toward me from the concession stand with another bag of candy.  I could see her running around the park with her friends.

Missing Maggie… but Not Alone

Where I couldn’t see her, was sitting in the back seat of my truck, talking about the night, talking about what she learned at practice or during a game.  The rides home that season were crushing.

Walking into the park and leaving the park without our daughter in tow was the most difficult part of being back in the softball world for Kelly and me.  Our post-game ritual was loading the rolling cart with gear and having just enough space for Maggie to ride back to the truck while she ate candy.

In the spring of 2018, the 6U coaches, along with the Trussville Girls’ Softball Association, surprised us on Opening Day by placing a “We Play for Maggie” banner on the 6U field and a beautiful plaque remembering our girl, Maggie, which greets fans and players as they enter the park.

Pictures began popping up on Facebook as players from visiting teams posted pictures of themselves standing in front of the sign or plaque.  This was just another reminder to us that we weren’t alone in this journey.

Throughout the summer, we were able to watch a few players from the Hewitt Trussville Middle School team play during their travel season.  In the fall of 2018, I was contacted to see if we would support a group putting together Team M7 which would be made up of players from HTMS and other teams from around the area.

The thought of a team playing in a tournament, wearing the M7 logo, was humbling.

“We are getting a team together...”  That’s how the request started.  They wanted permission to wear M7 as a team logo and play.  I arrived at the fields the first game and stayed until the last pitch.  Mid-afternoon, Kelly came out to watch. It was the first time she stayed for any length of time at the park and at the end of the game she walked on the field for the first time since the accident.

As she was introduced to the players, she broke down ,the players quietly circled around her and embraced her. Team M7 finished in the runner-up position that tournament and it was perfection.  The players left everything on the field.  The day was full of laughter and felt surreal.  This is our family, through good and bad we are in this together.

As time went on and with so much support from the softball community, Kelly and I wanted to find a way to give back.

Our first recipient, Hayden Neugent, wrote, “Softball has given me a new respect for others…..” In the moment of announcing Hayden, the connection was made between a 6-year-old softball sister and a graduating softball sister.

The Spring 2019 Varsity Softball team got hot at just the right time and brought Hewitt Trussville their first state championship.  With the games being played in Montgomery, Alabama, about an hour-and-a-half south of where we live, my best option was to follow play by via Game Changer on my phone.

They won the first game of the final day in their bracket, and I told Kelly that if they went up in the next game, we should drive to watch in person. I knew this was the first chance Trussville would have at playing for a title, and it would be worth the trip.

We left Trussville traveling south to Montgomery, while still listening via Game Changer, speeding up as each out was recorded.  When we arrived, they were finishing the second game and needed to win the next two vs Sparkman.  Hayden Neugent and Kaitlyn Hughes were splitting the innings.

Game one victory!!  On to game two.  The atmosphere was electric for softball, even more so when the high school football team showed up to cheer.  It appeared to be a great boost to the team and they continued to play great softball!

The Maggie’s “Rules for Life” Tournament

With all the softball community had done for us, we wanted to find one more way we could honor Mags while giving back.  After much discussion among friends and family, we reached out to Children’s Hospital and asked if we could host a tournament benefiting Children’s Pediatric Intensive Care Unit (PICU) and the Maggie Grace Bowles Memorial Softball Scholarship.

We chose the Pediatric Intensive Care Unit because of what they meant to us and everything they did to care for Mags.  In all of our time in the hospital, nurses and staff were swapping shifts to stay with us.  They cared for us, loved us and in the end picked us up when we had nothing left.

Going into the summer, the TGSA board approved the first Maggie’s “Rules for Life” Tournament.  The inspiration for the tournament name came from Maggie herself.

One day, Kelly was reading a book and creating a few rules for us as a family to follow.  Mags asked Kelly if she could write her own rules, and so they did.  During the time they spent together that afternoon, “Maggie’s Rules” were born: 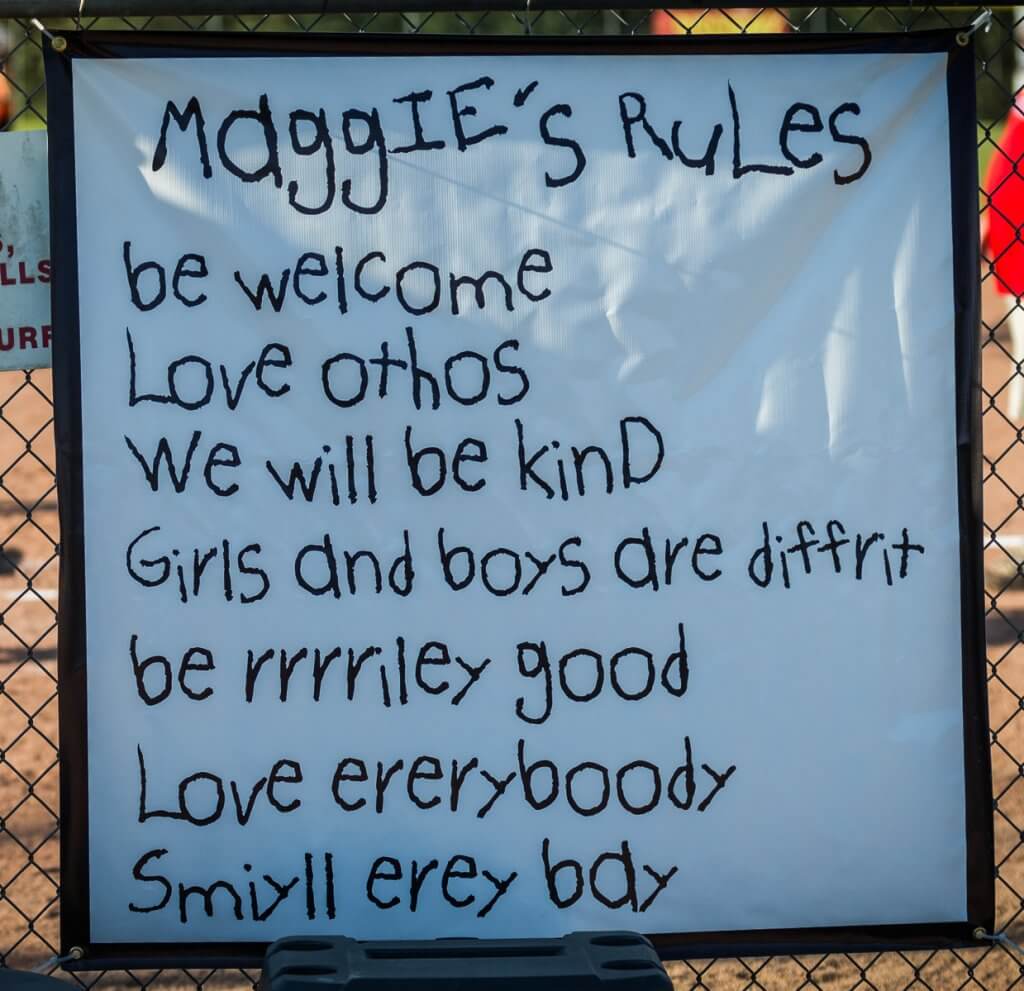 Twenty teams and over 60 volunteers turned out to support our first tournament.

The Trussville Girls’ Softball Board recently approved the tournament to become an annual event the first weekend of October.

If your team is interested in receiving more details about the next Maggie’s Rules Tournament, you can email me at skbkrbmgb@gmail.com.

Today (pre-COVID-19), Kelly and I spend time each Sunday coaching in our T-Ball program at Trussville Softball.  Our goal is to teach the next generation the basic skills and share the joy Maggie had playing the game with others.

In March, Kelly and I spent the day filming with "This is Alabama;" this is a glimpse of Maggie and how she continues to make an impact.  We hope you will take the time to watch it, share it, and if lead, become an organ donor.

Thank you for the love and support you have shown our family and remembering Maggie.