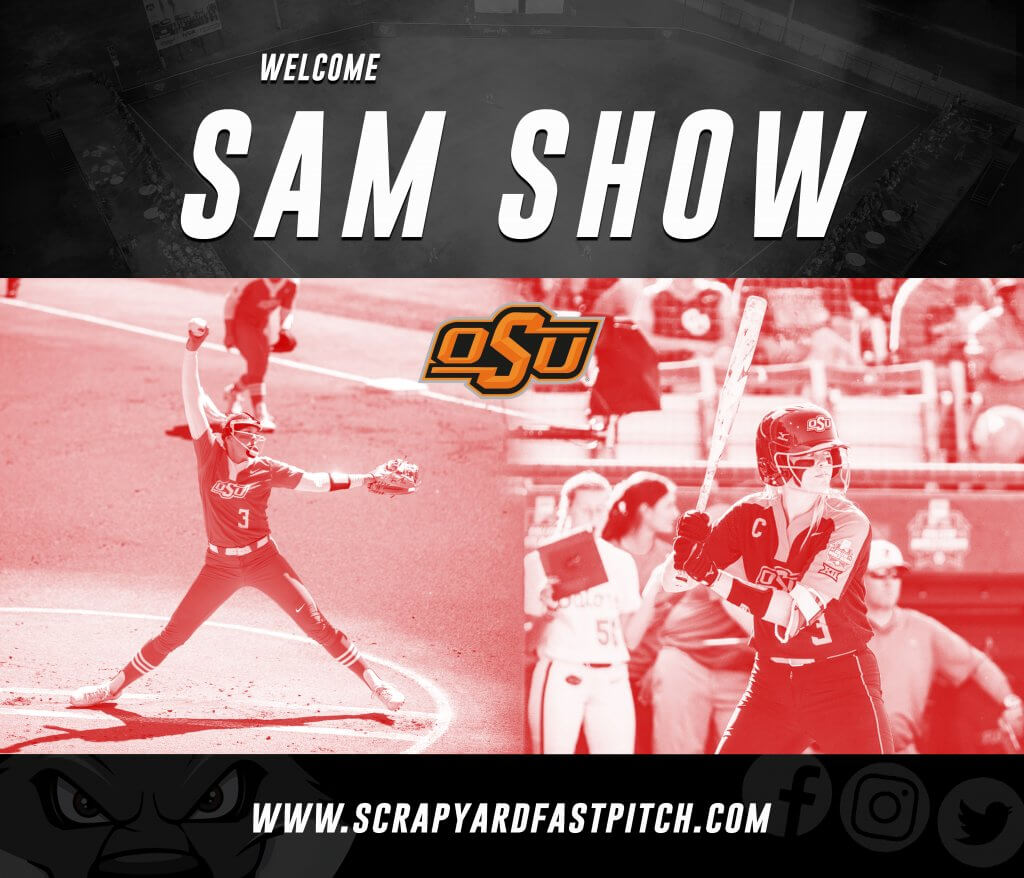 Two big announcements out of the Scrap Yard Fast Pitch camp on Monday:

First, the independent women’s professional softball team based out of Conroe, Texas, announced the signing of Sam Show, the recently graduated senior pitcher/hitter from Oklahoma City also known internationally now as “The Queen of Bat Flips.”

Sports fans world-wide recognized Show from her thunderous—now legendary— bat flips at the Women’s College World Series—she’s even been compared to Thor and his legendary Hammer!

Samantha Show is LITERALLY ON ANOTHER PLANET 🤯#WCWS | @CowgirlSB pic.twitter.com/7dtJ54Gzag

Show comes to SYFP after a stellar senior season as a Cowgirl, highlighted by OSU’s trip to the Women’s College World Series in Oklahoma, City just days ago.

Though she had dominating performances in the circle all season, the senior became a house-hold name with her electric and passionate play in the batter’s box and finished the season with 20 home runs, two of which were against Florida at the WCWS.

Show maintained a .333 batting average in her senior season and racked up 62 base hits and 56 RBIs.

In the circle, Show went 22-10 and fanned 110 batters during the season. She was awarded NFCA 1st Team All-Region honors three years straight in 2017 and 2018 while playing at Texas A&M and 2019 while with OSU.

The WCWS star was eager to share her thoughts on joining SYFP, saying, “I’m super excited to join SYFP! I’ll be backtogether with some old teammates and girls I’ve played against for the majority of my life. I’m looking forward to playing against the best of the best and competing against players I’ve looked up to. I can’t wait to play with everyone!”

With all the recent flurry of signings, the Scrap Yard Fast Pitch team has to play some games and the 2019 schedule was released on Monday.

Six of the games—three at the University of Louisiana at Lafayette on July 23, 24 and June 25 and three at the SYFP’s home field in Conroe, Texas on July 28, 29 and 30—will be live streamed here on Extra Inning Softball!

Here’s a detailed tour itinerary of where the roster of returners and new college signees (see team roster below the schedule) will be this summer:

* The 2019 team will come together for pre-season training at the Scrap Yard Sports Complex on June 16th to prepare for a summer of intense competition.

* SYFP’s first fan stop will be in Columbus, Georgia at the International Cup, hosted by USA Softball on July 1st-7th.

The squad will also compete in a few exhibition games prior to the start of International Cup on June 29th and 30th. This will be the second time Scrap Yard Fast Pitch has competed in the International Cup; last year hosted in Irvine, California, the team went 3-4 with wins against Puerto Rico, Chinese Taipei, and Peru.

Tickets for the International Cup can be purchased on USA Softball’s website.

* Continuing in the spirit of international competition, the team will travel from Georgia to Surrey, British Colombia, Canada to compete in the Canada Cup International Women’s Softball Championships.

This is the team’s first international trip for competition and the event is set for July 8th-14th with teams including Canada, Chinese Taipei, New Zealand, Republic of Korea, and Great Britain.

After a long two-week road trip, the team will hit the road again on July 22nd for a three-game exhibition series at The University of Louisiana at Lafayette Ragin’ Cajuns on July 23rd, 24th, and 25th against the USA Softball Women’s National team.

After a trip to Ragin’ Cajun country, Scrap Yard Fast Pitch will head home to the Scrap Yard Sports Complex in Conroe, Texas to host its three final exhibition games on July 28th, 29th, and 30th against the USA Softball Women’s National team.

These three games will conclude a 23-game season. 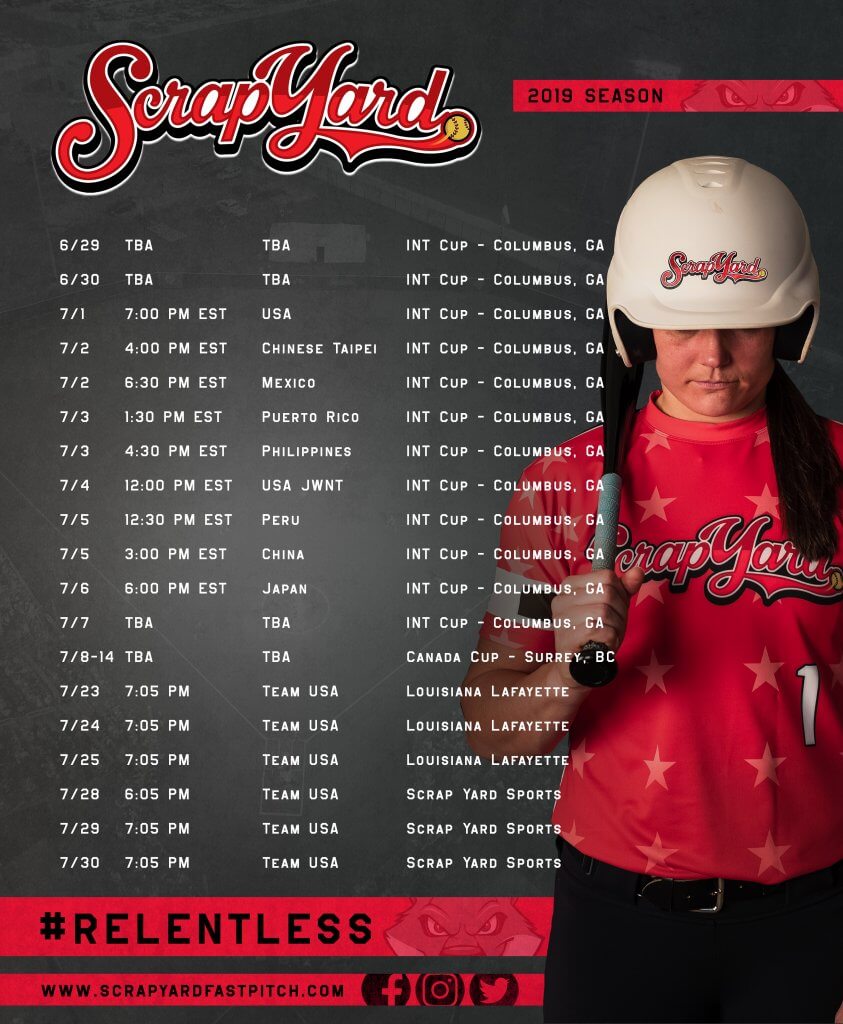 first 14 are returning players; those with * are collegiate senior graduates