2024 Extra Elite 100 Candidate Gigi Ganje: This Angel in the Outfield is a Fun-Loving Leader

It’s rare to see a tall outfielder flying around the outfield making highlight reel plays time after time, especially at this young age, but Gigi Ganje—standing 5-foot-8—plays the outfield like very few others do in her age group.

The Southern California 8th grader patrols center field using raw athleticism and sprinter speed to track down fly balls and has a cannon of an arm to punch out base runners trying to move up a station.

Gigi’s quirky and confident personality has made her a popular softball player on the Southern California travel ball circuit.

“I’m super confident in my abilities,” she says, “and I like to have fun and cheer on my teammates in my own special way, but I guess I can come off as a little silly sometimes.”

Gigi’s top goal this past season was to be named by her Corona Angels teammates as their team captain, which was a role she relished all season long.

Gigi and six of her teammates have recently joined Corona Angels 2024-Perez, coached by Mike Perez, for the upcoming 2019/20 season as they make their transition to 14U

Here’s a closer look at this talented ’24… 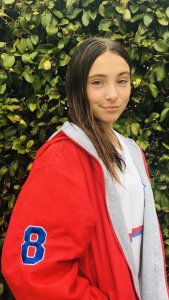 What do you enjoy the most about playing softball?
I enjoy playing with my teammates and building friendships.  I have friends from all over Southern California thanks to softball.  We’ve become friends with from playing on the same team together or just from going to camps and clinics together.

Have you set any personal goals this year?
Last year my goal was all about leadership and being named team captain, which I was.  This year I want to become as dominating of a hitter as I can.  I have my moments at the plate where I’m really good, but I need to be more consistent like I am on defense.

Who is your current favorite softball player?
It’s a tie between Sydney Romero and Shay Knighten.  Both players are amazing athletes and have performed at the highest level.   I met Sydney and Shay three years ago when I was playing 10U and they were so nice to me.  I see them every now and then and they always remember me.  I ran into Sydney at the Women’s College World Series in June and I’m taller than her now!

Who is your softball role model?
My softball role model is Kenny Knighten.  Kenny has been a Corona Angels coach forever, and he’s the father of All-Americans MJ Knighten and Shay Knighten.  Kenny was my hitting coach for over three years before I started hitting with Marty Tyson.  Kenny encourages and motivates me to be my best.  He believes in my abilities and has been my biggest supporter since my first hitting lesson with him.

What is it like hitting with Marty Tyson?
It’s a little nerve-wracking because Marty demands so much from his students.  I actually have to study my hitting notes the night before my lessons.  He’s very tough, but I like how he makes me better.

You are known as being a leader in centerfield and in the dugout.  Does being vocal on and off the field with your teammates come easy to you?
I actually talk a lot (some people would say too much!), so being vocal has always been a natural way for me to express myself, which is great since communication is such an important part of softball.

What is your favorite thing to do outside of softball?
Not a lot of people know this, but I make jewelry and I hope to have my own jewelry line soon.

What college camps have you attended?
I have attended camps at Stanford, Cal and UCLA.

What’s Your Favorite Softball Item?  My customized Wilson A2000 glove in Corona Angels red, white and blue colors with “GIGI CA ALL DAY” inscribed on it.
Favorite School Subject? Math, for sure.
Favorite Food?  Chick Fil-A, every day if I could.
Who inspires you? My friends, teammates, coaches and family all inspire me in their own way.
What sports are you going to play in high school?  Of course softball, but I’m also hoping to have time to play volleyball and run track.
What do you want to be when you grow up?  Once I get my engineering degree, I hope to be an engineer and a jeweler.