The Athletes Unlimited pro softball league that was publicly announced earlier this spring continues to add outstanding talent with players who have significant pro and/or international experience.

Last week, the league announced four new major additions including Cat Osterman who will take time this summer to play professionally instead of the original plans to take the field for the 2020 Tokyo Olympic Games which have been pushed back to next year.

Here’s a quick look at each of newly-added quartet and, below, our previous article on some of the other stars that will become competing in August: 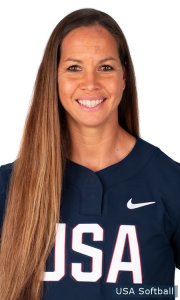 CAT OSTERMAN
Position: Pitcher
College: University of Texas
Team USA
Osterman is a two-time Olympic medalist and member of the 2020 Olympic team. She is a four-time Cowles Cup champion. Osterman led the Longhorns to three WCWS appearances and is the only three-time USA Softball Collegiate Player of the Year (2003, 2005-06) in the history of the game.

HANNAH FLIPPEN
Position: Infielder
College: University of Utah
Team USA
At Utah, Flippen was a two-time All-American and 2016 Pac-12 Player of the Year. She won the Cowles Cup in 2017 with the ScrapYard Dawgs. That year, Flippen also won gold at the 2017 Pan American Games. She was recently named a replacement player for the 2020 Olympic Team. 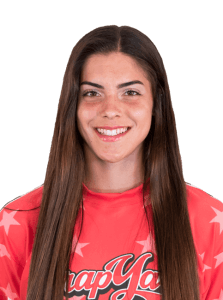 PAIGE HALSTEAD
Position: Catcher
College: UCLA
Halstead won an NCAA National Title with the Bruins in 2019. She represented USA Softball in the World Cup of Softball from 2015-2017.

While the softball world is itching to return to the playing fields, the Athletes Unlimited pro softball league that was first announced in March (see the ESPN article below for background) continues to sign top players in advance of its scheduled launch in August.

The first wave of players announced included standouts such as Gwen Svekis, the outstanding catcher who played at Oregon; pitchers Sara Groenewegen who starred at Minnesota, Kelly Barnhill who dominated at Florida, Haylie Wagner who was an All-American at Michigan and Victoria Hayward who was a star outfielder for Washington.

In late March several other famous names were released who had signed with the growing league including outfielder Jenny Gilbert who qualified for the Canadian Olympic Team; four who qualified for Team Mexico in pitcher Taylor McQuillin, catcher Sashel Palacios, infielder Amanda Sanchez and infielder Anissa Urtez.

In April the new additions included the Pendley sisters, Shelby and Nicole Pendley, who both starred at Oklahoma.

“A big welcome is in order for our new softball signees: Emily Clark, Kelsey Jenkins, Ali Aguilar, Lilli Piper, and Jordan Roberts. Here’s your 1-2 punch with what you should know about these women."

KELSEY JENKINS
Position: Infielder
College: Wisconsin
Since joining Canada’s Junior National Team in 2015, Jenkins has been an integral part of Team Canada’s dynamic lineup and helped them earn a berth to the 2020 Olympic Games.

ALI AGUILAR
Position: Infielder
College: University of Washington
Aguilar is a former collegiate two-time All-American out of the University of Washington and in 2017 was drafted as the 13th overall pick to the Scrap Yard Dawgs. She’s played professionally in Japan Softball League and was recently named to the 2020 Tokyo Olympics Team USA roster.

JORDAN ROBERTS
Position: Catcher
College: University of Florida
Roberts is a proud University of Florida alum and joins the AU family straight out of college. She finished her collegiate career on top with an errorless season behind the plate, the only player in the SEC with a 1.000 fielding percentage with a minimum 300 chances.

A new professional softball league that promises more than $1 million in compensation, long-term profit participation for players and a redesigned scoring system plans to launch in August.

Co-founded by Jon Patricof, former president of NYCFC in Major League Soccer, and Jonathan Soros, Athletes Unlimited hopes to succeed where other pro softball ventures have stalled in turning the sport's growing popularity at the youth and college levels into a profitable pro model.

Rather than a traditional multivenue league format, Athletes Unlimited will begin play in August with all four teams based in Rosemont, Illinois, part of the Chicago metropolitan area.

The softball-only Ballpark at Rosemont is already home to the Chicago Bandits of National Pro Fastpitch, the summer league entering its 17th season in 2020. Many of the players already committed to Athletes Unlimited are also under contract with the Bandits, including former University of Florida All-American and USA Softball pitcher Kelly Barnhill and all-NPF catcher Gwen Svekis.

According to Patricof, Athletes Unlimited has a formal working arrangement with the league, with NPF commissioner Cheri Kempf acting as a senior adviser. Their seasons will not coincide.

Each of the four Athletes Unlimited teams will play three games per week. Teams will be redrafted each week by the four players who accumulated the most points in the previous week, with those points determined according to a new individual scoring system that rewards both team performance and individual achievements.

Patricof said he would reveal the exact details of the scoring system later this week during a presentation at the annual MIT Sloan Sports Analytics Conference. He estimated about 70% of a player's score would come from her team winning games and innings, 10% would come from being selected one of three game MVPs by fellow players and the other 20% from individual performance.

"We really believe strongly that fans are increasingly following players over teams," Patricof said. "So there is this opportunity to really take advantage of that aspect and how you rethink a pro league where the athletes themselves are put front and center and where you give fans the opportunity to engage and track athlete performance in a new way."

Svekis is part of a four-player advisory board, along with Canadian Olympian Victoria Hayward, Jade Rhodes and Haylie Wagner, who have met with the co-founders each week since October. They helped the co-founders shape the scoring system, among other things.

"It's got to be one of the first time where us players have been involved since almost the inception of the idea," Svekis said.

Patricof said players would receive minimum base compensation of $10,000 for the six-week season, including five weeks of games. Bonuses for team and individual performance could take that to $35,000. The average NPF salary is below $10,000 for a roughly three-month season. For a pool of 56 players in Athletes Unlimited, the total available compensation is beyond $1 million.

Athletes Unlimited players will also receive profit participation for 20 years, which means a player who participates in 2020 will receive a share of any profits generated through 2040 (or 2041 for a player who enters the league in 2021, etc.). The intent is to reward players who help build the property, understanding profitability is unlikely initially.

"It's exciting to be involved in it and to see the growth of people like Jon and Jonathan wanting to invest in women's sports," Svekis said. "It gives us the opportunity to make a livable wage and reap the benefits for years to come. Obviously we don't know how it's going to be Year 1, but hopefully Year 20, we'll be still reaping the successes of all those athletes who are pushing the game even further."

There are 14 players currently committed to the league. No formal relationship exists with USA Softball, although Patricof said he had been in touch with the organization responsible for the team that will participate in this summer's Olympics.

Patricof declined to comment on distribution plans for league's games on television or streaming platforms but said the league hoped to make an announcement in the coming weeks. The league also declined to name any corporate sponsorship agreements at launch.

Athletes Unlimited intends to add additional pro sports ventures utilizing similar models. Those could include both men's and women's sports, although Patricof said there was an emphasis on what he and Soros identified as the growth potential of women's sports.