UPDATE: The Heart-Warming Story of Savanna Luther: “DeMarini Built Me A Custom Bat to Help My Dad Beat Cancer”

UPDATE: we get contacted frequently by readers asking us for the latest news on stories we've done in the past.

Two and a half months ago we did a touching story involving a young softball player from Texas named Savanna Luther who had her world turned upside down in January (seven months earlier) when her best friend--her father, Scotty--was diagnosed with Stage 3 throat cancer.

The Luther's financial situation got tight with the primary breadwinner sidelined for cancer treatments so Savanna got creative in how to 1) get a new bat and 2) bring attention to the cancer that afflicted her "best friend."

Below is the story of daughter and dad and how that developed.

First, though, a note from Savanna that she sent us this week:

" I wanted to let you know that I accepted the offer to play for Texas Glory 2024 14U. I'm super excited to be with such a nationally-ranked organization and travel team and look forward to the upcoming season in 2020. #TrulyBlessed #KeepGrinding #GodIsGood."

"FYI: my Dad's cancer is still in remission and he is doing awesome."

Great news for Savanna and her father and a lot to be grateful for in this month of Thanksgiving.

The Heart-Warming Story of Savanna Luther: “DeMarini Built Me A Custom Bat to Help My Dad Beat Cancer”

Warning: if you read this entire story, you may need tissues nearby.

Let’s just say, the story of Savanna Luther and her best friend, Scotty, has been known to make allergy season kick in early.

If you know what we mean…

Today, Savanna is a 13-year-old power-hitting catcher/corner infield from McKinney, Texas who plays for the Excel Elite 14U team coached by J.D. Swindall and has made her young mark as a promising 2024 grad.

But softball wasn’t her first sport—at age 4 she was a competitive gymnast and made it to the USA Gymnastics Level 3 stage, which she says is “equivalent to an A level 12U softball player.”

Savanna is your typical young teenager, who plays softball, volleyball and runs track while taking Spanish classes, hanging out with her older sister, baking, cooking, reading and playing video games.

Where the story gets interesting is when she shares who her best friend is and why: it’s her father, Scotty Luther.

Usually, when she writes of her dad, the words “best friend” are not too far behind.

“My dad has always been there for me,” she explains, “from my tumbling/gymnastics days until now.”

In January of 2019, the family was jolted when the family’s patriarch was diagnosed with Stage 3 throat cancer.

“Unfortunately, cancer runs in my dad’s family and we lost his mom—my grandmother— seven years ago to cancer,” recalls the young softball standout. “It devastated my dad and our family because she was the glue and rock to the family.”

“Even though I was younger, I remember my grandmother and the great times we had as she would always say to me and my dad: “Savanna Marie you’re going to be something special.”

“In February, he started his long journey of treatments—five days a week of chemo and radiation for 9-10 weeks,” she begins. “Later I found out after sitting with him at his treatments that if my dad chose not to do this, he would have had six-to-18 months to live.”

Softball season was approaching fast and the slugger knew her “best friend” couldn’t be at the practices or tournaments and that it would be hard financially on the family.

Fortunately, Savanna is not the type to sit idly by and watch… instead, she came up with a brilliant idea.

“It was really hard financially because my dad is the moneymaker in the family and with him not working, we survived from our savings, GoFundMe donations, family and friends,” she begins. 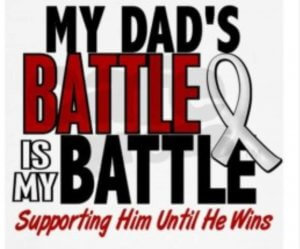 “My bat then was too small and I was needing a new one, but I knew we didn’t have the extra money to buy one. I spoke with my dad about an idea on wanting to do something positive about Cancer Awareness as well.”

The idea that Savanna came up with was to write DeMarini and see if the company would customize a bat so Savanna could dedicate her season to her dad under the banner of #Hit4aCure.

I know this may be a long shot but I'm going to ask.

I'm a well-educated 12-year old and consider myself one of the best hitters in the state of Texas. I have several DeMarini bats and have used them for years and consider them the best bats on the market. My dad, who is my best friend and coach, was diagnosed with throat cancer three weeks ago and I'm dedicating this season to him #Hitting4aCure.

Would you guys make a custom pink bat 32/22 with “hitting 4 a cure” on it in solid pink that I can swing for the season and send it to me at no charge?

Like I said I know it's a long shot but I'd love to do something special for my dad and we just don't have the extra money and it would mean a lot to me. We are playing in lots of big tournaments throughout spring and summer like the USSSA State, Triple Crown, Oklahoma City, etc.

Another idea to go along with this is for every base hit, double, triple, or home run I get DeMarini would send money to a cancer charitable organization. We're on Game Changer and it would be easy to track my stats.

I'm just a 12-year-old kid wanting to do something positive that affects so many people's lives.

Thank you kindly and respectfully,

It wasn’t too long before the Texan received the answer that DeMarini would indeed make the bat.

“I received wonderful news from DeMarini FP today,” Savanna wrote on social media at the time. “I wrote them about my Dad's cancer and how it would be awesome to swing a custom bat dedicating this season to #Hit4aCure. They said yes and loved my idea so I created it.”

Swinging her own custom-built bat, the season dedicated to her father was a smash success. Savanna led her team with nine home runs and 110 RBIs as she batted .480.

Always, however, in the back of her mind was the thought that she was playing for her father and a bigger cause.

“For months my Dad and best friend wasn’t able to watch me play because of his cancer treatments,” Savanna says. “They were really hard on him. I wanted to promote Cancer Awareness because it means so much to so many people. My Dad’s saying is, ‘If you see something, do something… don’t be a victim, be a survivor.’”

After months of chemo and radiation, the Luther family received great news in July: the throat cancer was in remission.

“I am so glad my Dad is back healthy and is doing well,” Savanna states happily. “He beat cancer.”

The experience did have a silver lining in another way: it gave the athlete an idea in what direction she wants to direct her studies.

“There are so many things in this world that need to be fixed,” she concludes, “and I’m a small fish in a big pond, but my goal one day is to be a doctor or nurse. After seeing my dad go through his cancer, I would love to be part of a team that creates a cure.”

Cleaning Up! 100+ New Updates in the Signing/Verbal Database As Commits Continue Everywhere (Jan. 23, 2020)!