Last Wednesday, Megan Ward from McDonald, Ohio—which sits on the Ohio/Pennsylvania state line and is about halfway between Cleveland and Pittsburgh—signed with the University of Dayton.

According to her club coach, Rona Dorsey of the Beverly Bandits 18U team which was ranked in the Top 25 of the Extra Elite Eighty rankings, Megan is an elite plate because of her “catlike athleticism, triple threat abilities at the plate and high softball IQ.”

Continued Coach Dorsey: “Megan knew she wanted to stay closer to home and find a school that supports her academic standards.  She committed to the University of Dayton after visiting seven different colleges that made competitive offers.”

As a leadoff batter for the Beverly Bandits in 2019, Megan batted .386 with a .413 on-base percentage.  The current senior led the team with runs scored (23) and also led the team in steals.  Megan played mostly at shortstop where her range allowed her to protect the middle and drop back into the grass.

The lefty has been a three-time All-Conference player for McDonald High and helped lead her team to a first-ever District championship and Regional appearance in school history last spring.

She batted a spectacular .768 in the lead-off sport with 16 steals and 20 RBIs for her team and also had a team-best 47 runs scored. Her outstanding play earned her a ranking in the Top 130 of the 2020 Extra Elite Rankings.

Her accomplishments off the field are similarly impressive: Megan is a 13-year Girl Scout member earning the Gold, Silver and Bronze awards; is a 11-year recipient of the U.S. President’s Volunteer Service Award nine consecutive at the Gold Level, one Silver and one Bronze; has earned a seven-year citation for community service from the House of Representatives and an eight-year citation for community service from the Ohio Senate.

“Megan’s strengths on the field are her quick athleticism and versatility on the field,” adds Coach Dorsey. “She plays middle mostly but has played outfield and can catch behind the plate.  She is quick in the lead-off spot and can effectively lay a bunt down, drag, soft or hard slap.”

Here’s more on this talented Class of 2020 infielder who will be staying inside the Buckeye State to play for the Dayton Flyers in the Atlantic 10 Conference... 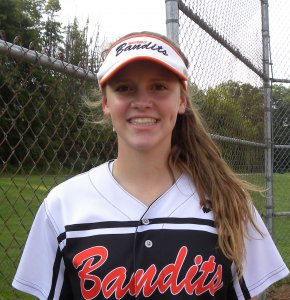 Where did you sign your Letter of Intent?
I signed my NLI at McDonald High School on Wednesday, Nov. 13.

What was the day like: big or small celebrations?
It was a smaller occasion, with my high school team, coaches, friends, classmates, school administrators and family.

Will did you do to celebrate the big day?
It was just nice to have support of friends and family to support me at my signing.

What date did you actually commit to the Cavaliers and how long ago was it?
I verbally committed to the University of Dayton on December 18, 2017 (fall of my sophomore year), which is about two years ago.

What highlight stands out to you about the recruiting process?
Being recruited by Division I schools.

What was the “aha” moment when you knew the program was the right one for you?
When I met the Dayton coaches and stepped on campus, I knew this was the right place for me.

What did signing with your dream school mean to you personally and to those who’ve been part of your success (family, coaches, teammates, etc.)?
I have been waiting for this day for so long and now that it was here it just helped me realize all of my hard work and training has paid off to get me to this point, but it is just beginning of the next level of play. I personally want to thank my coaches, trainers and family for all of the hard work to get me here!

How much gear/product do you have of Dayton?
I have been stocking up on UD gear for two years!

What’s next for you and your softball plans this upcoming year?
My travel team will be a serious contender at PGF Nationals in Huntington Beach, California this summer.

Did you ever think that signing with your dream school would come?
It has been almost two years since I verbally committed and it seemed to be a long wait until this day (Signing Day). It is almost hard to believe it has happened.