Emma Knight is only a second-year 12U player, but she's already one of the most battle-tested and experienced club softball players at the national level.

She helped Impact Gold National 07-Smith to a third-place finish at the 2017 PGF 10U Premier Nationals and to the 2018 PGF 10U Premier national title in 2018. Her consistently exceptional play in big-game situations is a big reason why the C/1B/3B is considered one of the top 2025 prospects in the nation.

Riley Whitley, a highly-touted 2025 P/1B/OF prospect, was a teammate of Knight's on those talented Impact Gold teams and both have moved on to Texas Bombers Gold-Crabtree, which was formed in the fall.

"I consider Emma Knight one of the best 07 players in the country," Whitley said. "She is a relentless competitor with a never-quit attitude. She is one of the hardest working teammates I have ever had, both on and off the field. Not only is Emma my teammate, but one of my best friends too. She makes me a better pitcher when she’s behind the plate catching me. When it comes to offense, Emma is a BEAST of a power hitter. Emma and I won the 10U PGF Premier together. During that time I learned Emma had a strong will to win attitude. Off the field, Emma has a bubbly and fun to be around personality. I have no doubt that emma will be a top prospect in years to come."

"She has all the tools," Bombers coach Cassie Crabtree said. "She will hit home runs, drive one in the gap, bat for high average and is an RBI machine. She batted in the 3-hole the entire year and was a hard out. If there were runners on, she was getting them in. Teams did not want to throw to her because she was going to hit an XBH (extra-base hite) in the gap, down the line or over the fence.

"Her arm is way above average behind the plate and nothing is too much for her to handle behind the dish. No one ever tried to steal on Emma and she will throw anyone out at any time. Emma plays a solid third base and can read the ball off the bat so good. She can read a bunt, throw on the run and not scared of anything hit at her. She will knock it down and throw you out."

Softball isn't the only area where she has made her mark. She burst onto the national scene a year ago with a viral essay "When I am 100 years old ..."

"Turns out people really liked what I wrote, because it totally went viral," Knight said. "That paper I wrote was shared over 20 million times on Facebook, Instagram, Twitter, etc. In fact, if you Google "when I’m 100 years old," my paper is the first thing that comes up." 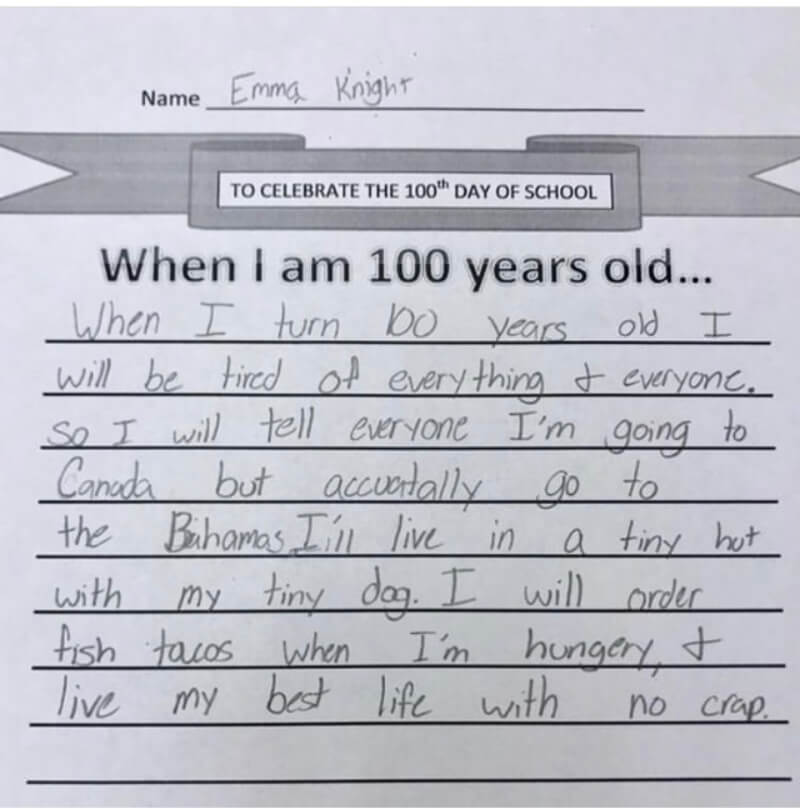 *** Go inside "Extra Star Power" to learn more about one of the top 2025 prospects in the nation.

Tell us about your travel team/organization and how you became involved with them?
I joined the newly-formed Texas Bombers Gold National team coached by Cassie Crabtree in the fall of 2019. I had played against Crabtree’s team the previous season and I just really noticed and loved her coaching style and enthusiasm. Coming to her team has been the best thing I’ve ever done. She understands me so well, not only in softball, but in everything. She and I are super close and I talk to her literally everyday. She is one of my very favorite people in the world.

Since we are all under stay-at-home orders because of the coronavirus situation have you developed any new training methods to stay busy?
Yes, I have really tried to take advantage of this extra time. Every morning Coach Crabtree hosts a Zoom for a hour-long killer cross-fit workout. Then in the afternoon, she has an hour-long hitting or fielding session with the whole team. It also really helps that I have an indoor batting cage that my dad built for me here at my house, so I hit on my own every day too, rain or shine. And I love basketball too, so I have a court here at home and shoot pretty much every day as well.

You are only in your second year of 12U, but you already have so much experience at the national level. Can you talk about your run to the PGF 10U Premier national title in 2018?
Well, that whole season was exciting because I was playing up on a really good 12U team at the time, while also playing as many 10U tournaments as I could with Impact Gold 10U National Team. I think I played six tournaments with them, and we won all six. Going into the 2018 PGF Tournament, I already knew a little bit about what to expect since I played in it the year before. I felt really prepared going into that week, and I pretty much knew we had the best team, so I was super confident. It is a pressure-packed tournament but so much fun. I've made memories there that will last me a lifetime.

What is something you have faced in your life that has helped you become the person that you are today?
Since I started playing softball at age 5, I always played on older teams with girls two four years older than me. Playing with older girls made me step my game up both mentally and physically, so I could compete at their level. Those experiences helped define my work ethic from a really early age.

What's your most memorable softball story? It can be humorous, serious, ironic or all of the above?
In 2016, I broke my thumb during a game while catching, but I didn't know that it was broken at the time, so I just kept playing. I finished up catching two more innings on that Saturday, then on the next day, I played 3rd the whole day and still batted, finishing out the rest of the tournament. I went to the doctor the next day and was in a cast for the next six weeks.

What have you learned about yourself in the past year?
Well during the past year and especially during this quarantine, I have learned how independent I am. Without having any siblings, I’ve been by myself a LOT, and I’ve learned that I’m really capable of keeping myself busy and entertained for long periods of time. I’ve also learned how much I really enjoy the grind of both softball and basketball. I pretty much hit and shoot for hours everyday by myself mostly, and it never really gets old to me. I guess you could say thats kind of my “me” time.

Do you have a secret talent/skill?
I love being on the water anytime I can, and I’m actually a pretty decent wakeboarder.

If you could have dinner with four people dead or alive, who would it be?
Babe Ruth, Kobe Bryant, Adrian Beltre and Kim Kardashian.

What are you looking for in your future college?
Academics are very important to me, as well as a good athletic program, so it’s really important to me that I go somewhere that offers both. While I love softball and all that goes with it, getting a marketable college degree from a top university is my top priority.

What do coaches say they like most about you and your game?
I’ve been playing high level softball for a long time, so I hear that my softball IQ is pretty high. Also, since hitting is my obsession, I get a lot of compliments on my swing.

What’s been the highlight of your athletic career so far?
Winning PGF Premier Championship in 2018. 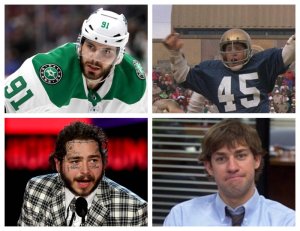 What's your spirit animal? Lion.
Favorite pro athlete: Jamie Benn of the Dallas Stars.
Favorite Movie: "Rudy."
Favorite song/artist: Anything by Post Malone ... I love him.
Favorite actor/actress: John Krasinski.
Favorite TV show to binge: "The Office."
Favorite motto/philosophy on life: "You don’t have to like me bro, I like me" --- Kanye West