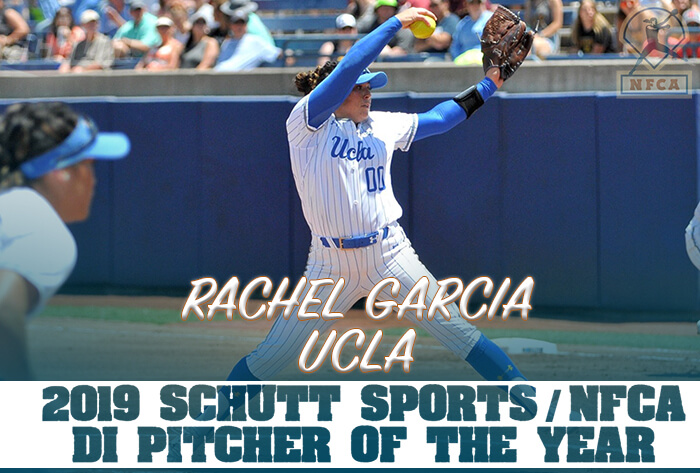 There was a flurry of awards this week from the NFCA... in case you missed this one, the Div. I national champion UCLA Bruins added another award to its trophy case...

UCLA’s Rachel Garcia has been named the 2019 Schutt Sports/NFCA Division I National Pitcher of the Year, the National Fastpitch Coaches Association (NFCA) announced on Thursday.

Garcia, a three-time NFCA All-American, was instrumental in the Bruins’ run to a 2019 national championship.

The junior hurler was named the Women’s College World Series’ Most Outstanding Player after posting a 5-0 record with a 1.75 ERA, 33 strikeouts and 10 walks in 36 innings of work.

She became just the fourth USA Softball Collegiate Player of the Year to win the WCWS in the same year.

The Pac-12 Player and Pitcher of the Year led the Bruins pitching staff with a 29-1 record, 1.14 ERA and 286 strikeouts in 202 innings of work. Garcia posted seven shutouts, four saves and held her opposition to a .162 batting average.

She finished ranked seventh nationally in ERA, strikeouts per seven innings (9.9) and strikeout-to-walk ratio (6.65), along with being eighth in strikeouts and ninth in victories.

Offensively, she contributed with a .343 batting average, nine doubles, 11 home runs, 57 RBIs and a .449 on-base percentage.

The award was voted on by the members of the NFCA’s NCAA Division I All-American Committee. Garcia, who was last year’s Schutt Sports/NFCA Division I Player of the Year, earns the inaugural pitching award from the Association.

Schutt Sports / NFCA Division I Pitcher of the Year

Schutt Sports / NFCA Division I Player of the Year