Hallie Siems is a 5-foot-8 pitcher from a small-town in Arkansas who has earned all-state honors the last two years because of her ability to hit her spots… and we have video to prove it!

In a workout with her father, Clay, Hallie can be seen knocking a softball of the tee as she throws a variety of pitches and speeds.

No surprise that she had several colleges after her but Robby Wilson of National Scouting Report, who helped Hallie with the recruiting process, says, “When we first started, Memphis was her #1 choice and not a lot of girls get to play for the top choice.”

Here’s a closer look at Hallie on and off the field including what the recruiting process was like for her, what advice she’d give to those about to be recruited and how she has continued to push herself after she committed… 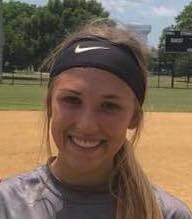 Hometown/ST: Stuttgart, Arkansas
Grad Year: 2020
Position(s): Pitcher/Outfielder
Club Team: Tulsa Elite
High School (City/ST): Stuttgart High
GPA: 4.0
College: Committed to Memphis
Top Honors/Accomplishments: 2018: All-State, All-Conference; 2017: All-State Honorable Mention, All-Conference; Five-Year all A’s honor roll, National Honor Society
Preferred College Major: Medical Field, Oral Anesthesiology (specializing in oral surgeries)
Coach’s Comments: “Hallie’s tight spins and spot-on command is why she misses bats. She picks hitters apart and is a very aggressive “come right at you” kind of pitcher. Hallie is a vertical movement kid who mixes her speeds in and out very well. The kid trains like she’s not committed and the championship is coming tomorrow. Offensively, she’s a 3- and 4-hole power hitter who averages .450-plus and has a linear swing and quick hands. Hallie will be one of those talents who sees the circle early and often, not only because of her skillset, but because of her coachability and tough skin and mindset.” – Robby Wilson

You have a video where you’re throwing to a ball on a tee and knocking it off with impressive accuracy... what’s the story behind that?
My dad and I had just finished practicing and I was worn out, but dad wanted to do something “fun” for a change and wanted to see if I could stay focused. He put the tee high and inside to start out and asked me to throw a screwball (scrise), I threw about 5-10 pitches and they all missed but they got closer and closer each time.

By this time, I was super frustrated, so Dad asked me to step off the rubber, take a breath, clear my mind and when I was ready, throw. I took about a two-second breath and, being stubborn, pitched the ball with all my strength with the intention of breaking the tee the ball was sitting on, but I hit the ball on the tee. Dad set the ball back up there, and I hit it again. I got comfortable with my mechanics and remembered how it felt whenever I hit the ball and I started hitting the ball more frequently. I was still pitching and missing, but about every other one or every two pitches I was hitting the spots all over the plate, high and low.

Talk about the recruiting process and how that went from start to finish for you? When and how did you commit?
It started out when I attended a fall camp at Memphis. The camp went well and was able to visit with Coach (Natalie) Poole and Coach (Helen) Pena afterwards. I knew then I wanted to play for them. That night I called Robby (Wilson) with NSR who was helping me with the recruiting process to see if they might have called him about me. Robby said they wanted to see my back again. That was exciting to know they were interested in me so when I went back, they took me to their inside facility where they hit and pitch. I was in one lane and another pitcher was in another lane and we were pitching to some of the Memphis players. I knew that if I was to stand a chance I had to be better than the other pitcher.

After, we finished Coach Poole came to me and my dad and asked if we would stay around for a while that she wanted to talk to us. Once everybody had left we went to Coach Poole’s office with Coach Pena. They told me they liked what they saw and would like to have me back for a visit. So, a few days later mom, dad and I went to visit and tour the campus. When we finished the tour, Coach Poole and Coach Pena set us down in their office and began to tell me what they could offer and if I was interested. Right then I started crying and then we all were crying and hugging. It was a very exciting day for me.

What advice would you give younger players in terms of exposure and being recruiting?