After competing in prestigious events like the USA Softball International Cup and the Canada Cup, Scrap Yard Fast Pitch (“SYFP”)—an independent women’s professional softball team—will return to the Southwest to finish its summer season playing a half dozen games against Team USA.

Here is the schedule of the six games—three in Louisiana and a final trio at the team’s complex in Conroe, Texas: 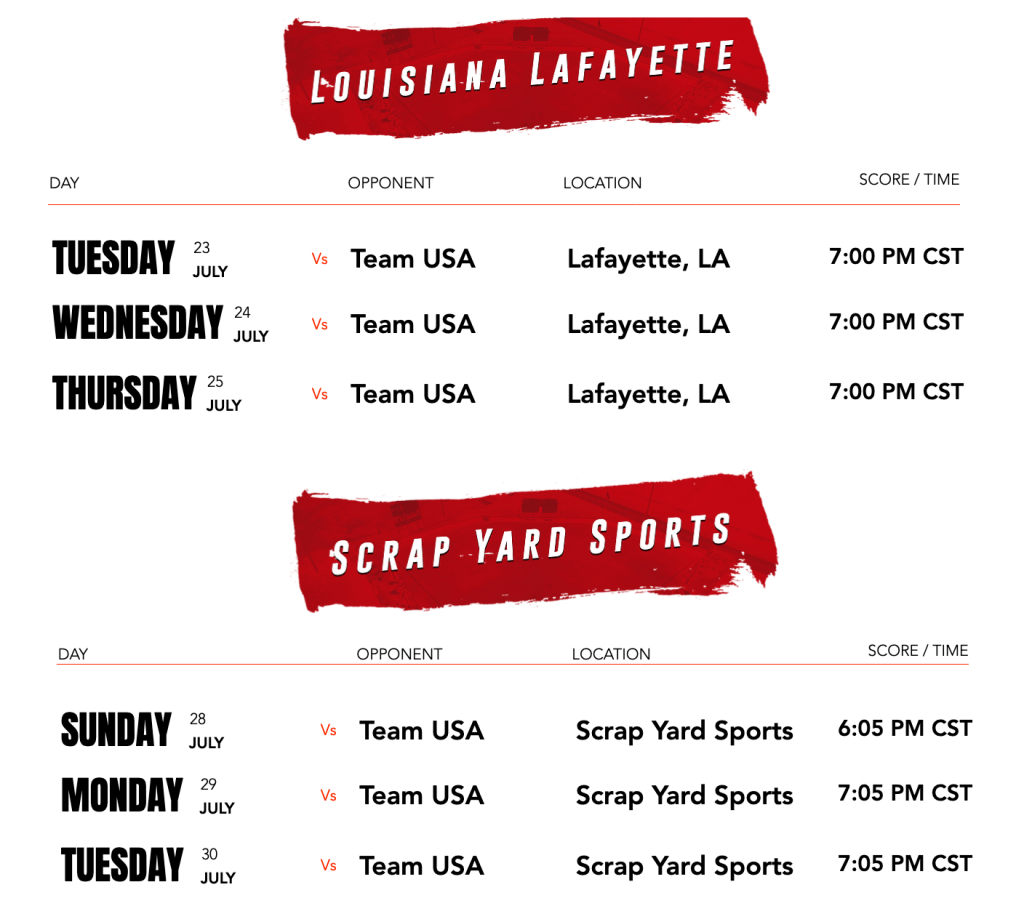 All six contests will be live streamed for free on Extra Inning Softball’s Facebook and YouTube social media pages.

Stay tuned for details coming this week on how to watch the 6 games live on Extra Inning Softball!

This is Year 2 for the Scrap Yard Fast Pitch team and General Manager Connie May says the reason for its existence remains as strong as ever.

“Every athlete playing this sport should be able to dream of playing professionally and being able to make a living doing it,” she says. “Our quest is to ‘Grow the Game’ and make sure that dream is a reality!”

"The mission is 100 percent the same. We have had to be creative in the approach with so many international obstacles this year with Olympic qualifying, but feel we have stepped up the game even more being more diverse in our locations and competition.”

It’s tough to replace some of the best in the world as they move to the other dugout, but Connie May says the transition has actually been a positive one.

“In Year 1,” she begins, “we had so many athletes barnstorming, and the USA players coming and going in the quest to qualify for 2020 in Tokyo, the personality of the team didn’t really have time to set in. In 2019, you’re seeing the fun and relentless competitors that are on the field. These ladies have come together and are firing on all cylinders as they’re going into the match-ups with USA Softball to close out the season.”

“We have been so blessed!” May adds of picking up these big-name players who come with strong credentials and name recognition.

“They are the very top of the sport and are dynamic personalities who have only enhanced our roster. Those players can carry any roster individually and we are grateful to have all of them with us.”

The results have been impressive, including making it to the finals of the Canada Cup, losing to the host team after beating Canada earlier in the event:

So what can we expect in the level of play of the Scrap Yard Fast Pitch squad as it battles the #1 team in the world new week?

“The character of Scrap Yard Fast Pitch has always been about having top-notch athletes with a blue-collar mentality,” May finishes. “These players love to compete and understand that the hopes and dreams of every young lady who plays this game are in their hands!”

Want to get pumped for the six games of SYFP & Team USA? Check out this video of the pro team warming up for action…

🎥 It all starts tomorrow. #relentless pic.twitter.com/WGh81rO2RC