This week’s Extra Inning Softball National High School Player of the Week honors perhaps the most clutch pitching performance of the year… many states are wrapping up their seasons, but we still have some amazing playoff performances to highlight!

It was the setting of what could be a Hollywood sports movie: the #1 and #2 teams in the nation battling for not just a state title but the bragging rights to be called the national champion.

That was the situation in Florida last Friday, May 25th as top-ranked Lakewood Ranch of Bradenton faced Winter Springs in a battle of unbeaten powers in the Class 8A championship game.

And with several-DI players on both sides of the field, this looked like it would be a slugfest, but it ended up being a pitching masterpiece by junior Aysnlie Furbush, who only gave up one hit and one walk—both in the 7th inning when her team was ahead 3-0—to give the Bears the eventual win.

Furbush, who struck out four in the complete game victory, admitted she was “a little nervous, but it was an excited nervous” as she approached the game. When the action began, the Ole Miss commit said it didn’t take long for her to figure out if she had her good stuff.

“Once I stepped on that mound that day, I felt amazing—I felt like I could pitch so many more games, but this was the game that mattered," she told Extra Inning Softball.

Using a change-up that kept the Lakewood Ranch hitters off-balance, the pitcher knew once she was staked to the 3-0 lead that the Bears had a great chance to finish on top.

“Once we got out of the 3rd inning,” Furbush added, “I knew I was dominating because I had only been throwing to three to four batters an inning.”

Even when the critical point came in the 7th inning when the tying run came to the plate, the standout junior felt in control.

“When they had those two runners on, I wasn't worried at all because I know if they got a hit my defense was behind me to back me up like always.”

Aynslie finished the season with a 16-0 record and of the 15 games she started, she completed 11 of them. The pitcher compiled a 1.10 ERA against elite competition and had 105 strikeouts in 108 1/3rd innings. She held opposing batters to a .168 batting average,

Years from now, she says she believes she’ll know what will be the first memory that will come to her mind when she reflects on that magical finale.

“The first memory from this amazing day will be when it was the last out and it was hit. I turned to watch Kaley Mudge catch the ball and then began running to her. When the final catch was made I had so many emotions running through my body. I wanted to scream for joy, I wanted to cry from happiness. It was all so overwhelming!”

Runner-Up Players of the Week

* Aniya Holt, a junior infielder/outfielder for Shawnee Heights (Kansas) High was nearly flawless for the week.

She went 8-for-9 at the plate in the three final games including a 4-for-4 performance with a home run and six RBIs to lead her team to a third straight 5A State Championship.

Aniya had 11 RBIs in the three games. She was originally committed to Kansas but is back on the recruiting market after the Jayhawks’ coaching change.

* Nicole May, the junior pitcher for Foothill (Pleasanton, California) High who is committed to Oklahoma, led her team to the CIF North Coast Section Div. I title last Saturday by shutting out Heritage (Brentwood, Calif.) 2-0.

She pitched a one-hitter with 13 K’s and also hit a two-run home run that provided all the offense she would need to for the title win. Foothill finished the season 28-0.

* Kennady Warder, a junior catcher and middle infielder for Bethlehem (Bardstown, Kentucky) High went 3-for-3 with three doubles and four RBIs to help hear team advance to the district championship game where she had three intentional walks in a 4-3 loss.

* Abigael Pochie, a freshman for St. Laurence (Burbank, Illinois) High—a suburb of Chicago—was on fire last week. She pitched a perfect game and a no-hitter during regional playoffs.

In the first win for the Vikings, she struck out 11 and in the second game, which won regionals, lost the perfect game on an error, but still ended the two games with 20-plus strikeouts, no walks and no earned runs.

* Taylor Pannell, the outstanding freshman from Rock Island (Illinoi) High continues to impress as she helped her team win the Regional and move on in the playoffs.

The leadoff hitter who plays third and shortstop went 4-for-6 (.667) with a home run, double, four RBI, five steals and no errors. The Auburn commit is a 2022 standout who will be announced later this week as one of the top prospects in her class. 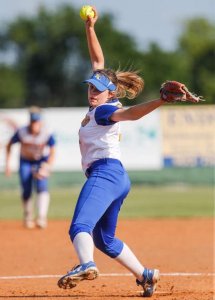 * Karsyn Iltis, a sophomore pitcher for North Lamar (Paris, Texas) High and a commit to the Univ. of North Texas helped her team reach the 4A Region II finals as well as receive the #1 ranking for 4A teams in the Lone Star State

In the three-game series with Melissa for the Class 4A Region II semifinal series, she went 4-for-8 with five runs knocked in and pitched all 23 innings of the series with 12 K’s.

Impressively, 16 of the 23 innings pitched were in back-to back games with one game going nine innings. For the season (35 games), she is hitting .525 with 40 runs scored, 54 RBIs and six home runs.

Each week during the spring and summer high school seasons, Extra Inning Softball will honor a National High School Player of the Week.

The honoree will be announced every Monday night/Tuesday morning; cutoff for submitting the nominations is each Sunday at 11 pm EST/8 pm PST.

We’re looking for standouts who excelled in the circle, at the plate or in the field so be sure to nominate your favorite performance(s) by submitting the following:

Email your info and photos (1-4 as available) by the cutoff of Sunday 11 pm EST/ 8 pm PST to: info@extrainningsoftball.com.

Video Spotlight: 2021 Shortstop Julia Crenshaw & Coach Evan Beatty of St. Louis Chaos… Why the “Stick” Can Mean Something Totally Different for Her!

Video Spotlight: 2021 Shortstop Julia Crenshaw & Coach Evan Beatty of St. Louis Chaos… Why the “Stick” Can Mean Something Totally Different for Her!