Kylee Magee could end up on "Project Runway" with her amateur seamstress skills one day, but for now she will settle for mowing down opposing batters with her wicked riseball on the softball diamond.

Magee has been elevated to Tyson's 18U Corona Angels this fall.

"Kylee is an amazing pitcher and she brings a lot of energy and confidence to the field," said Marissa Gonzalez, an uncommitted 2021 C/SS for the Corona Angels.

"She gets a lot of swing and misses while she is on the mound so it always gives our team momentum moving forward in the game. She has a lot of grit and whenever she is put in a difficult situation like coming in from bullpen with bases loaded and no outs, she will go in there and get the job done. She also is an amazing teammate. She always keeps it real with you, but also helps you out if you are having a bad game. Kylee is just an amazing person all around and a great friend to have on and off the field."

"She definitely has an immensely strong mound presence on top of being a well-rounded pitcher," Otis said. "She brings energy to the field along with her competitive nature, and it's super exciting to play behind her because you know she has your back as much as you have her’s out there."

Said Sinicki: "Kylee is the type of pitcher anybody would want on their team. Kylee brings so much energy every pitch and play that feeds off to everybody on the field. It's always great playing behind her. Even when she's not pitching, she brings up the spirit in the dugout and on the field still. Her future at ASU is going to be so bright, and her rise ball is just going to continue to get better even though it is one of her best pitches now. Every strikeout has so much heart and energy, and I love the little hand gesture we do after every out. She's a dominant pitcher no matter what situation she is in. Great person and great teammate to have."

*** Go inside "Extra Star Power" to learn more about one of the top 2022 prospects in the nation.
*** NOTE: Click on the words in Bold to discover hidden links! 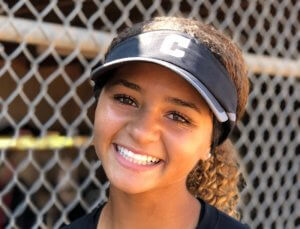 High School/Travel Ball Highlights: Her team won the Boulder IDT and PGF 14U Premier National Championship in 2018 and placed third at PGF 16U Premier Nationals this past summer. She led Canyon High to a Crestview League title and had an Orange County high 265 strikeouts this past season.

*** Scroll down to learn about Kylee and why she loves being an Angel and why she thinks outsiders "hate what we are and what we do."