There’s no sign of the transfers slowing down at the college level as players are coming and going at an unparalleled rate.

With no sign that the program-switching movement is going to slow down anytime soon, here are some of the latest updates… (may want to keep a scorecard handy!).

Great teams like Patty Gasso’s OU Sooners don’t rebuild, they just reload and it continues to be the case for the Big 12 team out of Norman, Oklahoma.

Although Lopez is off to Arizona, Oklahoma added for USA Softball Jr. National Team infielder Taylon Snow who has been a star in the softball world since, well, all the way back to middle school.

Following in the footsteps of older sister Tannon, who set California state records with 60 career home runs and 212 RBI and CIF-Southern Section marks with 28 home runs and 89 RBI in 32 in 2015 at Chino Hills (High), Taylon has also had a prestigious pre-college career.

She set the all-time CIF-Southern Section record with 72 hits in a season as a freshman in 2014 and, in the club world, was the youngest on the OC Batbuster team that won a PGF first National Championship that same summer.

In the PGF title game, Taylon hit a key RBI double to help the Batbusters win that year and also the next, in 2015.

Taylon would go on to earn high school All-American honors multiple times in her prep career and at one point was ranked #1 in the Class of 2017 by Brentt Eads before ending up #5 in the final 2017 rankings due to quad injuries in the fall of her senior year.

The SoCal native recovered enough to go on to play for the USA Softball Jr. National Team two years ago and have a strong two-year career in the SEC.

In a release issued by OU Athletics, the move to the Big 12 was announced as follows:

Snow, who will be a junior next year, comes to Oklahoma after spending the first two seasons of her career at Auburn.

“We are beyond thrilled to be adding Taylon Snow to the Sooner family," Gasso said. "Our fans will enjoy her athleticism and versatility. Her experience and leadership will be a great addition to the 2020 roster."

Snow started 52 games at shortstop for the Tigers in 2019, ranking third on the team with a .324 batting average. She finished the season with one home run and 27 RBIs while leading Auburn with 17 multi-hit games. Snow posted a .975 fielding percentage for the Tigers in 2019 and helped them turn 30 double plays, the most by any team in the SEC.

The Chino Hills, Calif., native tallied her 100th career hit on April 17 against Alabama State and slashed .324/.387/.359 during her sophomore season.

Snow was an All-SEC Freshman Team selection in 2018 after earning 47 starts at shortstop. Her .325 batting clip was good for second on the team as she tallied 49 hits, scored 26 runs and led the Tigers with three triples and seven doubles. She completed her freshman season with a .411 slugging clip and a .377 on-base percentage.

Snow will join a Sooners squad that is coming off its fourth straight Women's College World Series appearance and eighth consecutive Big 12 regular season title in 2019. OU will announce its fall schedule at a later date.

*** As noted in the headline, however, OU is likely losing another pitcher along with Lopez as Parker Conrad has entered the transfer portal.

The Norman Transcript has reported that there will probably be three Sooners who played on the 2019 roster that won’t be on the team next spring:

Lopez went 19-1 and led OU’s pitchers with a 1.25 ERA as a junior last season. She and Giselle Juarez emerged as OU’s two primary pitchers, but coach Patty Gasso relied mostly on Juarez during the postseason.

If Lopez leaves the program [Extra Inning Softball: which she officially has now, to Arizona], she’ll finish as OU's career leader in winning percentage (.962; 51-2).

Conrad, who transferred to OU after one year with Missouri, played sparingly for the Sooners. She appeared in 22 games and won a game as a sophomore.

Schultz has appeared in 60 games for OU but started once. She has two career hits, including a home run, and a .091 batting average.

OU's pitching depth would be affected if Lopez and Conrad depart. Although, the two-time All-American Juarez and rising senior Shannon Saile will return in 2020.

Nicole Mendes, who will be a senior next year, has also seen action in the circle. 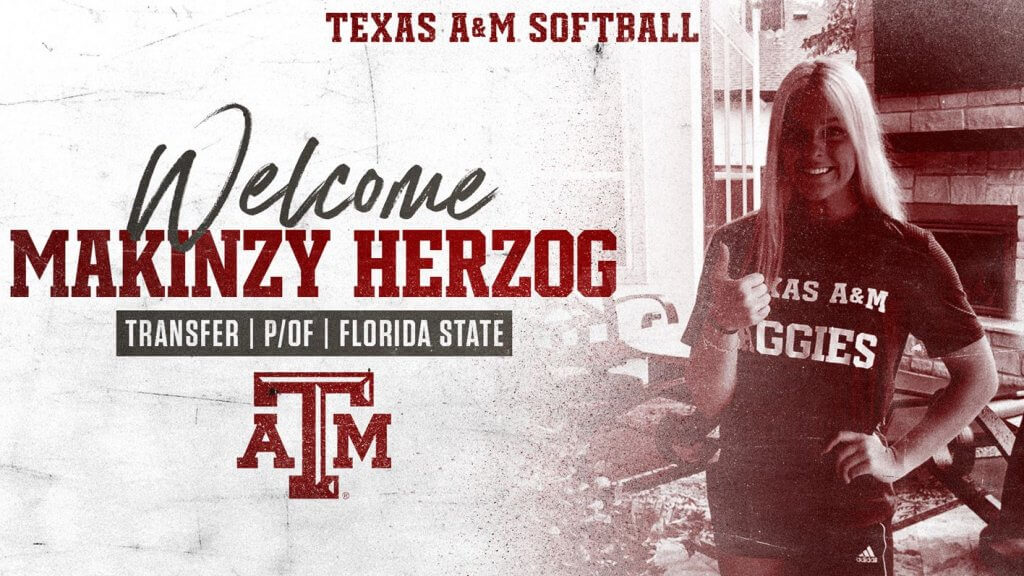 We were hearing two weeks ago that outstanding pitcher/utility player/athlete McKenzie Herzog, who played as a freshman for Florida State, would be returning back to her native Texas to play for the Aggies of Florida State (check out that post HERE.).

Herzog, a great athlete who was ranked #2 in the 2018 Extra Elite 100 and was a had a lot of ties to A&M before committing and the coaching change of Craig Snider from FSU to A&M couldn’t have hurt.