USA Softball announced another pair of tour stops for the Stand Beside Her Tour as Team USA will travel the nation to face top competition in preparation for the 2020 Olympic Games in Tokyo, Japan.

Here are details on the new additions which will see games against three college teams in the South and Northwest:

The 2020 USA Softball Women’s National Team (WNT) will bring the “Stand Beside Her” tour to the University of Oregon on March 18, 2020 as Team USA will face off against the Oregon Ducks and Southern Oregon University.

The tour stop marks a homecoming for 2020 WNT member Janie Reed (Placentia, Calif.), who graduated from the University of Oregon in 2015, while the 2020 WNT prepares for the 2020 Tokyo Games.

“I can’t explain how excited I am to get to go to Eugene on the ‘Stand Beside Her’ tour,” said Reed.

“I never got to play in The Jane and I already know it’s going to be an emotional experience getting to wear the USA uniform on that field and in that stadium - especially in front of the best fans in the world!”

During the Eugene tour stop, fans will have the opportunity to watch the Red, White and Blue compete in an exhibition doubleheader. Played at Jane Sanders Stadium (1677 University St, Eugene, Ore., 97403), Team USA will play Southern Oregon University at 3:30 pm PT followed by a matchup against the Oregon Ducks approximately 35 minutes after the conclusion of the first game. Tickets for the game will go on sale December 6 and can be purchased at GoDucks.com. General admission tickets will be $15 and reserved tickets will be $27.

“We are honored to host the USA Women’s National Team here at Jane Sanders Stadium,” said Oregon head coach Melyssa Lombardi. “Our players will have the chance not only to play against the very best players in our game, but also to interact with them and really see what it takes to be an Olympian. This is also an incredible opportunity for our fans to see the best players in the world competing right here at The Jane, and the fact that we will be welcoming home an all-time great Duck in Janie (Takeda) Reed makes it all the more special.”

The 2020 USA Softball Women’s National Team (WNT) will play an exhibition contest at Auburn University on April 1, 2020 as the U.S. looks to capture the Gold Medal in Tokyo where the sport of softball returns to the Olympic program for the first time since 2008.

“The ‘Stand Beside Her’ tour helps us tremendously to build our family culture and chemistry to carry us through the Olympic Games,” said 2020 WNT member, Taylor Edwards.

“Having the opportunity to compete together and against some top competition in the U.S. will definitely help us get our skills even more fine-tuned and create our team heartbeat. It’ll be an awesome experience traveling to Auburn and getting used to change and being adaptable as a group. We are so excited for the journey!

In Auburn, Team USA will take on the Tigers at Jane B. Moore Stadium (795 W. Samford Ave, Auburn, Ala., 36832) in an 6 p.m. CT matchup. Tickets for the game go on sale December 6 and can be purchased by visiting AuburnTigers.com. Reserved chairback seats are $25, reserved grandstand seats are $20 and standing room only tickets are available for $15.

The tour will kick off in February with the USA squad competing in a pair of prestigious college tournaments and run through the summer right up to the start of the Tokyo games.

Olympic competition will start July 22, 2020 with the Gold Medal Game being played on July 28.

As created and first announced in August by USA Softball, the Stand Beside Her tour “evokes a powerful message of unity aimed to inspire communities to stand beside HER – the members of the WNT, America and the future generation of female athletes.”

Currently there are 14 stops on the tour hitting nine states and extending from February to June prior to next summer’s Olympic Games.

Here is a visual map of all the places Team USA will play on the Stand Beside Her Tour as announced so far: 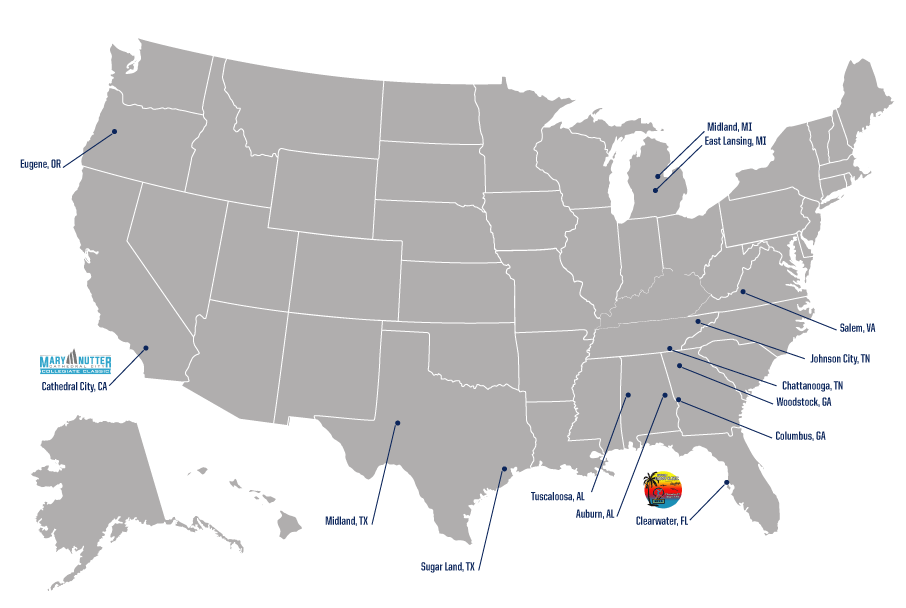